The Assassination Of Jesse James By The Coward Robert Ford (2007)

Based on the novel by Ron Hansen, it is, boiling it down to the most basic components, exactly what it says it is. It's also so much more though, starting with a look at who Jesse James (Brad Pitt) really was, a man who sometimes enjoyed his reputation and sometimes had it tightening around his neck like a noose, and then showing the things that would fall into place to lead to that fateful moment that gave Robert Ford (Casey Affleck) his moment of fame.

Adapted into screenplay form by director Andrew Dominik, a man who has been drawn throughout his career to the idea of criminals buying into/creating their own hype and the knife edge of fame and infamy, this is a film with a few people delivering some of their very best work, and that includes Roger Deakins, a man with no shortage of great cinema moments to throw into contention for the best ever. Even by his own high standards, Deakins delivers something here that has a perfect blend of grit and beauty.

When it comes to the cast, Affleck takes the top honours here. His character is never once likeable, and his presence often creates a sense of unease for those around him. Affleck plays it perfectly, showing us all the man who doesn't want to be seen directly by those he interacts with onscreen. His every attempt to charm backfires, whether it is due to him speaking "out of turn", taking a second too long to pick exactly the kind of smile he wants to offer, or sizing up any company to decide who he wants to side with if things suddenly go South. The next best performance may well come from Paul Schneider, pretty much the exact opposite of Affleck's character. I don't mind Schneider, but have rarely had cause to consider him as a really good actor. He really impressed me here. Other great turns come from names you expect to deliver great turns. Jeremy Renner does well, but both Garet Dillahunt and Sam Rockwell effortlessly remind viewers of why they are so welcome in any project they board. Sam Shepard, Mary-Louise Parker, Pat Healy, and Ted Levine all remind you of how good they can be, and Pitt excels as someone who has enjoyed making himself into a legendary figure he is now trapped by.

There are small mis-steps here and there, with one being a moment of narration that goes out of its way to tell us how Jesse James had a condition that made him blink more often than most people . . . before we see him throughout the movie hardly blinking at all. This seems, and is, a very minor failing, but it just seemed so odd to have had this detail pointed out that is then seemingly forgotten for the rest of the film.

While James is the figure at the centre of everything, however, Dominik takes his time to eventually lead viewers further and further into the mindset of Ford, showing the divide between the romanticised ideas of gunslingers making their mark and the reality of knowing how it felt to take someone else’s life with one pull of a trigger. I won’t say that you ever really warm to Ford, but the journey he goes on shows his brief ascension to “stardom” before heading towards an inevitably miserable and troubled existence. He is a man defined by one act, an act he tries to keep justifying for years, and everyone gets to form their own opinion of him.

It would be rude not to mention the soundtrack, from Nick Cave and Warren Ellis (with Cave also onscreen for one very memorable moment), and the whole feel of the movie is superbly authentic, but it is the visuals and lead performances that will stay in your mind after the end credits have rolled. They are right up there with the very best of the 21st century, and this is a film that deserves the praise it has received over the years since it was first released. You won’t forget viewing this, and I doubt the lengthy runtime will put anyone off from revisiting it when they want to bask in the quality and gorgeousness of it. 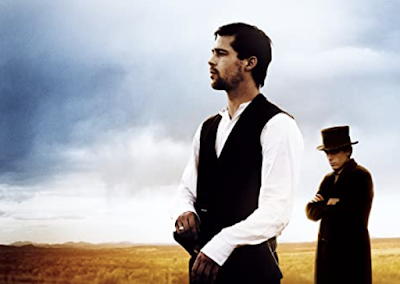