A horror film starring Caroline Williams, an actress arguably best known for her role as a potential final girl/DJ in The Texas Chainsaw Massacre Part 2, Ten Minutes To Midnight has her playing Amy Marlowe, a DJ about to slog through her usual late-night slot with the threat of impending forced retirement looming over her head. As well as the stress of the situation, which includes spending time with a young woman who may end up being her replacement (Sienna, played by Nicole Kang), Amy has some issues stemming from the fact that she appears to have been bitten by a bat on the way in for her shift. The weather outside is bad enough that the people in the station cannot leave the station, and Amy finds her mental state deteriorating.

I was wary of this film before I even pressed play. Although not too familiar with Williams, I knew that her name was being used as the main selling point. And I figured that once again putting her in the role of a DJ was an easy way to get some brownie points from horror fans, meaning there was a chance of less effort being made in other departments.

This is a mess, albeit an occasionally entertaining one. The first half mixes some potential vampire shenanigans with the constant stress piled on the lead character, who knows her days employed at the station are numbered. Then things change, and not for the better, leaving you with a whole film that doesn’t succeed in being either scary, gory, funny, or insightful.

Directed by Erik Bloomquist, who also co-wrote the script with his brother Carson Bloomquist, this is a film that feels like the people making it may have had more fun than anyone who ends up watching it. It’s disappointingly repetitive and spirals towards a very weak conclusion, but some of the cast do enough to stop it from being as bad as it otherwise could have been.

Williams is okay in her role, at least able to put on a fantastic “fuck you” pose to those around her that she can’t even bother feigning niceness to. Kang is a highlight, acting sweet and nice until things take a severe turn. You also get some fun turns from William Youmans, Nicholas Tucci, and Adam Weppler.

The camera generally points in the right direction, and other technical aspects are competent enough, but nothing is done that helps to elevate the material. That could have been a case of making more of the radio station setting, or it could have been achieved by streamlining the concept away from the surreal turn taken in the third act.

If you have a chance to see this one, my advice is to “turn the dial”. 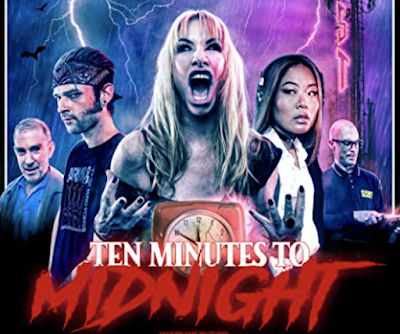