Yes, I like to mix things up in my viewing schedule. And I like to keep a good mix of reviews on my blog. Which is why I didn’t use the space today to review The Great Beauty, which I watched just before this. I am also waiting for the right time to put down my thoughts on the excellent The Assassination Of Jesse James By The Coward Robert Ford. Which is why you now have some words here on a film that barely feels like a film, Vice Academy Part 2.

A number of people return to reprise their roles from the first movie. The warring Holly Wells (Ginger Lynn) and Didi (Linnea Quigley) are still fairly new recruits in the world of the police. They are forced to work together, setting out to thwart a plan by Spanish Fly (Marina Benvenga) to pollute the water supply with an aphrodisiac concoction. They also need to work together to prove to the cocky Petrolino (Scott Layne) that women can be just as good at police work as men.

Don’t worry. None of the plot here involves anything remotely close to actual police work. It is, once again, an excuse to make bad jokes, throw around some gratuitous nudity, and belatedly parody Robocop with a new member of the squad being tested (BimboCop, played by Teagan Clive).

Rick Sloane is the man responsible for all of this, again, giving himself the role of writer-director-producer with his main aim to make something cheap ‘n’ cheerful that will titillate fans of the leading ladies. Never mind trying to cover up the low budget, never mind attempting anything logical, this is a slight sketch stretched out to feature length. And it was even stretched out to a few more sequels after this.

Lynn and Quigley are quite bad, but that is part of the charm for anyone, like myself, who considers themselves a fan. I will watch Quigley in anything, and I have, and her constant overacting is inextricably part of her onscreen persona. Layne is a decent enough meathead, who you look forward to seeing mistreated, and Jayne Hamil is once again a bit of fun in the role of Miss Devonshire, the boss who tries to manage our leads. Clive is okay as BimboCop, despite the joke falling flat from the start, and Benvenga is a fun, non-threatening, villain. Nobody else is worth mentioning, with the exception of Jo Steele in the role of Jeannie, an attractive colleague who usually works on the switchboard.

You should already know whether or not you will already give it your time. It is, in many ways, absolutely terrible. It is also a bit better than the first movie. I wouldn’t rush to rewatch any of these, but I won’t hate myself for giving them some of my time. Although I don’t know if that sentiment will change when I eventually check out the rest of the movies in the series. 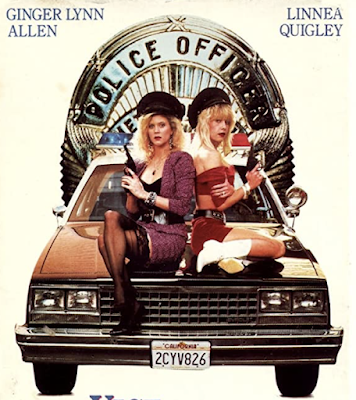