If you want some wholesome and enjoyable content to make you smile then you should check out the many photos of Lia McHugh on her IMDb page. Most of them have clearly been out there by McHugh herself, complete with contextualising text descriptions that show how much she loves her acting career.

If you can spend two hours browsing that selection of photos then you will probably have a better time than you would if you actually watched Eternals, a Marvel movie that feels more redundant than any others we have seen so far.

Described as Earth’s first superheroes, Eternals are a group of people with different powers who work together to help care for the human race. They can only ever intervene when humans are being attacked by monsters called deviants, which conveniently explains why they never tried to help when “the snap” happened, and most of their time is spent just observing people and trying to act like one of them. There hasn’t been any deviant attack for a long, long time. And then there is one, one unlike the others. This deviant may be able to absorb powers while it takes lives. And it may reveal a truth about the Eternals that they will struggle to accept.

Although it’s not actually a bad movie, in many ways, I can feel my enthusiasm for this film ebbing away with every word I write. There is a mildly interesting development in the second half that takes things in a slightly unexpected direction, but the end result is still a group of people dealing with some giant CGI. What’s worse is that the more enjoyable characters seem to be too quickly dismissed from the action.

Director Chloé Zhao, who also helped write the screenplay (Patrick Burleigh and Ryan Firpo being the other writers on this), does what is expected of her, trying to liven things up enough with an action sequence here and there to distract from the fact that these are the dullest superheroes we have seen in a long time. Sadly, she cannot do enough to make up for the central problem.

At least the cast help, although the lead being played by Gemma Chan leads to the big problem of, well, the lead being played by Gemma Chan. Richard Madden does a bit better, as does the aforementioned McHugh, but the best cast members are Angelina Jolie, Brian Tyree Henry, and Kumail Nanjiani. Barry Keoghan plays an interesting character, but plays him as if he can barely be bothered to stay awake. I don’t blame him, it’s a tough job to stay energised with such a mix of deja vu and plodding mediocrity. Even Salma Hayek cannot help, although her relatively small amount of screentime was better than no Hayek at all.

There is a nice cross-section of characters here (Lauren Ridloff is a deaf Flash-like character who speaks in sign language), but the bad outweighs the good. By far. With the pacing issues, the inability to engage viewers properly, and the tired feeling the material has, I have to say that this is the weakest big MCU movie so far. I hope it is an anomaly. 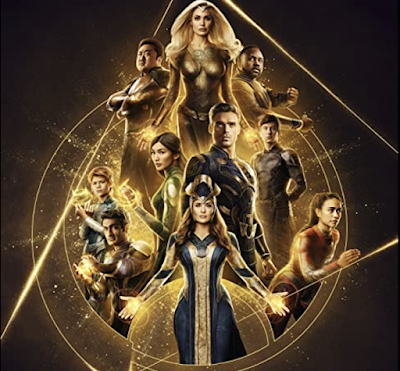