Remember when you couldn't be told what The Matrix was? You just had to see for yourself? It was a game-changer, as they say, even if it wasn't actually all that original. The Wachowskis took some great ideas, some manga-inspired portrayals of action, bullet-time, and a great cast, and made a sci-fi action classic of the 20th century. That kind of thing can't really be repeated, as shown by the sequels. Maybe to try and recapture any of that cinematic magic is a fool's errand. If that is the case, director Lana Wachowski may well be the smartest fool around.

The Matrix Resurrections takes place after all of the events that we saw play out years before. Thomas "Neo" Anderson (Keanu Reeves) has been reincorporated into the matrix, allowed to incorporate elements of his past adventures into a massively popular videogame trilogy. Identities have changed in this universe, but the parts are essentially the same. Neo is Neo, he just isn't aware of it. Trinity (Carrie-Anne Moss) is Trinity, but she's been restrained in the role of a housewife/mother named Tiffany. There's a Morpheus (Yahya Abdul-Mateen II), there's an Agent Smith (Jonathan Groff), and there's a plucky resistance fighter (Bug, played by Jessica Henwick) looking to set things in motion to bring down the whole facade.

I loved this film. Absolutely loved it. And I can see why so many people hated it. Very few people enjoyed the previous sequels as much as I did, and this is very much a logical development from those. It takes the next step in the evolution of the matrix, as a concept, reframes the narrative in a way that is an obvious and brilliant direction for Lana Wachowski to choose, and delivers comments on the current state of society with all the subtlety of a slap in the face with a wet kipper. There are statements about people believing in emotions over facts, statements about the comfort of nostalgia, and a few lines dotted throughout that lovingly deride the optimism we loved in the original movies. Choice is an illusion, those we think have the power might just be in need of saving, and even that awe-inspiring bullet-time is derided for being oh so yesterday.

There's an argument to be made for this being just as impressive and vital as the first film, but I doubt I am the person to make that case. I'll just say that it comes damn close, with no small thanks to the constant feeling of someone biting the hand that is feeding them. Wachowski, who also co-wrote the movie with David Mitchell and Aleksandar Hemon (both having previously worked together on the series finale of Sense8), knows how redundant it could be to just rehash everything we've seen before in these movies. She also knows that it's a property that will be bled dry by those in control anyway, and that means Warner Bros. in this case (there's a very pointed line in here about that). Knowing those two things, Wachowski decides to smash up the toyroom, disassembling everything and reassembling it to be the same, but crucially different.

Reeves and Moss are still as necessary here as any of the film-making technique on display. They are the yin and yang, two halves of a beating heart that keeps flummoxing computer programs. Both do great work here, looking very tired and yet still very capable of handling themselves. Henwick is a lively new presence, her character being the one to quickly explain some of the new rules to characters she wants to help break out of their somnambulism. Abdul-Mateen II cannot hope to make himself as immediately iconic as Fishburne was, but he is helped by the script, trying out lines of dialogue from the first movie for size and getting himself comfortable in his new body. Groff is decent, albeit no replacement for Hugo Weaving, and Neil Patrick Harris gets to portray the most interesting new addition to the cast of characters, The Analyst, someone who viewers will immediately surmise knows more than he is letting on. There are small roles for other newcomers, such as Priyanka Chopra Jonas and a wasted Christina Ricci (wasted in her brief cameo, not wasted on any mind-altering substances), and some more returning players get treated very differently by the material. Jada Pinkett Smith gets to play Niobe in a similar way to how she was played before, but Lambert Wilson's The Merovingian is basically just used to comment further on the decline of modern civilization and the non-stop corporate interference in our daily lives.

Unfortunately, and surprisingly, the one weakest part of the film is another reason why I can see why so many reacted so strongly against it. The action sequences aren't that good. That's okay if you're just a sci-fi action movie that people decide to take a roll of the dice on, but it's a whole different kettle of phishing emails if you're the next instalment in The Matrix series. Some moments work well enough, and there are a couple of chase sequences that feel like a fun mash-up of Inception and Monsters, Inc., but the big set-pieces are marred by some clumsy choreography and horrible editing. The subversion of the big moment that everyone is waiting for is clever and fun, but I can equally see why people might find it irritating, almost contemptuous of the audience.

You know what, maybe Lana Wachowski IS contemptuous of her audience. Being such a fickle bunch, maybe audiences earn an occasional bit of contempt. If this is the end result, I don't mind at all. That's the way the cyber-cookie crumbles.

The Matrix Resurrections is the wildest mainstream movie sequel since Gremlins 2: The New Batch. It's a big middle finger raised to the idea of unoriginal, self-devouring, franchise instalments churned out to appease the masses while the world goes to hell in an Amazon basket. And it does that while being dressed up as an unoriginal, self-devouring, franchise instalment. 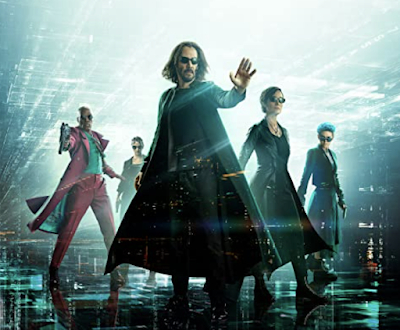