It's no wonder that mainstream moviegoers are so often given the same product recycled again and again and again. It would seem that many, understandably, crave the comfort of familiarity over any attempts to strike out on some new directions. Sold on the line that "this is the sequel that the fans deserved"and "this is what fans really wanted", Ghostbusters: Afterlife is, essentially, a clumsy rehash of elements from the first movie. It relies so much on nostalgia, and has a plot that comes perilously close to simply being "evil dies tonight", that it's arguably closer in form to Halloween Kills than the first Ghostbusters movie.

I'm going to try to avoid spoilers here, but you can all rest easy in the fact that there are a number of satisfying cameos in this film. One such cameo is Egon Spengler. Well, it's the spirit of him. Due to Harold Ramis having passed away a few years ago, the writers of this film (Gil Kenan and director Jason Reitman) decided to kick things off with the death of his character, allowing for plenty of extra button-pushing and emotional manipulation throughout. With Spengler deceased, his property is handed over to his estranged daughter, Callie (Carrie Coon), and her children, Trevor (Finn Wolfhard) and Phoebe (McKenna Grace). Things start to get spooky, old equipment is discovered (including the ECTO-1, of course), and there's a local teacher, Mr. Grooberson (Paul Rudd), who can provide exposition and become directly involved in the whole escapade.

I enjoyed many parts of Ghostbusters: Afterlife, and that includes many parts that worked for me by simply making reference to the first film. It's fun to see people practising their aim with a proton pack. It's great to see the engine of the ECTO-1 starting up. And a decent part of the plotting actually works well as a direct continuation of previous events. The good work, however, is undone by the feeling of laziness, smugness, and disrespect by the time everything if thrown at the screen in the third act to placate viewers who deserved much better. A large part of the problem is the reliance on the spirit of Egon, which would have worked better if it was just, as it is in much of the movie, a vague and undefined thing. There are another couple of major issues though, and they will be brought up shortly.

Cast-wise, everyone is fine. While I am not the biggest fan of Wolfhard, and he is the least of the younger players here, he doesn’t do a bad job. Celeste O’Connor does a bit better, playing a girl who catches his eye/heart. Rudd gets to play the character who is the most amusing and Coon has to simply be “the parent”, which she does fine with. But it’s the younger cast members who shine, with Logan Kim great fun as a young podcaster, imaginatively named just Podcast, and Grace being the best new Egon type since Kate McKinnon in the last Ghostbusters movie (oh stop pretending it doesn’t exist, it is a better idea overall film than this one). Grace is so good that she makes up for a lot of what Reitman and Kenan get wrong.

Directorially sound, everything wrong here stems from a script that is desperate to remind viewers of the original without the writers themselves remembering, Yes, people love the characters and the equipment, and we all want ghosts and beasties to create havoc at times, but there should also be a lot of laughs (which this is lacking). There IS, at times, a sense of fun, and it is often blended with that warm glow of familiarity, but there are very few actual laughs. What you also used to have were movies that stemmed from a legacy of films mixing chills and humour, so it wasn’t necessarily entirely original, but it felt entirely original. What we have here is a film that cannot go for more than a few minutes without repeating a well-known beat or referencing the cinematic past of the Ghostbusters business. That doesn’t seem so bad when it all feels effective (references to Shandor work well, and some returning faces feel like a logical choice for a big villain). It fails when you realise that it’s the height of laziness (cute they may be, and in the final trailers, but there is no reason for the mini-Stay Puft characters here, except for easy bonus points and merch).

It didn’t pain me while it was on. There are some nice shots, the soundtrack works well, and uses a number of familiar cues, and one or two set-pieces feel enjoyably cinematic and able to remind us all that “bustin’ makes me feel good”. It’s not a great film though, and I would argue that it’s the weakest Ghostbusters film yet. Maybe a sequel that doesn’t feel too beholden to the original film will work better. I hope we get to find out. 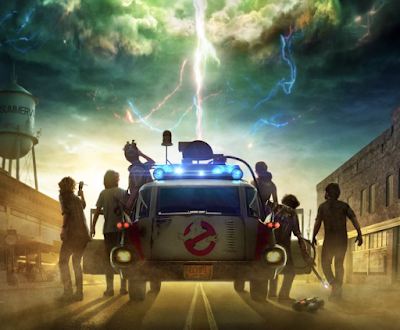