Sometimes a movie comes along that really highlights the divide between audiences and out-of-touch movie critics. Venom was one of those movies. It was a mess, particularly during a CGI-filled third act, but it was also a whole lot of fun. Venom: Let There Be Carnage is a sequel that stays very comfortably in that messy fun zone. It's also just as good as the first film, and benefits from not having to set up the central Venom/Eddie Brock dynamic, positing them from the very first scene as a standard "odd couple", good friends who also irritate the hell out of one another.

After talking to the notorious murderer Cletus Kasady (Woody Harrelson), Eddie Brock (Tom Hardy) finds his star back on the rise. He might be moving from loser to less-dismissable loser. The fact that his story actually came from information detected by Venom means that his body-sharing symbiote personality is, to use the technical term, ready to go in a big huff. Venom rarely gets to eat the food that he likes best, he doesn't get credit for his work, and he's fed up of the way Eddie is resolutely not making the most of his life. He might even leave Eddie's body and look out for some other host. That timing wouldn't be very good, because Cletus Kasady has his own symbiote about to reveal itself, a red beast named Carnage.

Andy Serkis is the director for this instalment, taking over from Ruben Fleischer, and Kelly Marcel is now the lone writer, although Hardy is credited with helping shape the direction of the series. Everyone involved maintains a nice consistency, developing the humour that was quickly set in place in the first film while also increasing the threat level. Not only is Carnage a stronger and more dangerous foe, he has a potential partner who goes by the nickname Shriek (Naomie Harris). Shriek has a power that you might be able to guess from that name, and that may well prove a vital advantage while fighting Venom.

Everyone here knows exactly what they are a part of, a silly film that can bob and weave around moments of seriousness. Hardy is a real hoot, playing an exasperated “partner” who has to admit that he should try harder in a relationship he unwittingly got dragged into. Harrelson plays his deranged killer with a good balance of sadism and wit, and just a hint of a tragic past informing his motivation. Stephen Graham is a cop wondering how Eddie Brock gets his information, and both Harris and Michelle Williams (returning) get to do enough to feel like more than just token females dragged into the plot. Okay, Williams is put in peril at least once, but she is also responsible for forcing her ex, Eddie, to acknowledge his flaws and acknowledge the feelings of others.

The CGI is less murky than it was in the first film, although the finale is still essentially one computerised blob fighting another, the fun factor is ramped up further, and there are some very enjoyable cameos scattered here and there (the most notable being a stinger at the very end). It may retread familiar territory, and some may still bemoan the fact that Venom has had his sharp corners smoothed down, as it were, but this is a film that I can easily recommend to fans of the first. In fact, watch one immediately after the other and you have one near-perfect Venom epic. Without the need to actually go . . . EPIC! 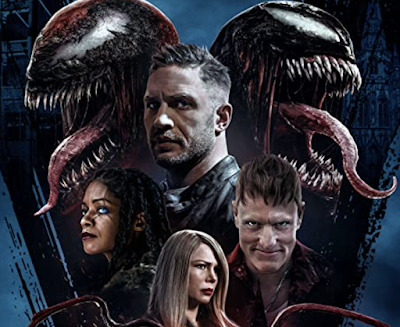