Marking the feature directorial debut of Maggie Gyllenhaal, who also adapted the novel of the same name by Elena Ferrante into script form, The Lost Daughter is very much a film looking at an experience common for most of the female population. It's about motherhood, the expectations placed on women to be the main care providers for children, and the thoughts that people process when they see those expectations being dismissed, either intentionally or unintentionally.

Olivia Colman plays Leda, a professor out to enjoy a bit of a working holiday. She will do some reading and writing, but most of her studying can take place on a sunny beach. Potential peace and bliss is spoiled, however, when a large family take over part of the beach. They aren't nice people, apparently, but Leda refusing to give up her own spot on the beach makes her a curiosity. In turn, Leda cannot stop watching young Nina, a woman struggling with her own daughter. When Nina's daughter goes missing one day, Leda saves the day by finding and returning her. But the child is unhappy, her favourite doll having gone missing while she was on her wanders. Different tensions rise, within Nina, within the extended family, within Leda, and there's a sense that things may go very badly. Perhaps the present is connected to the past, which we see as a younger Leda (played by Jessie Buckley) struggles with motherhood while trying to develop her learning and career.

The first thing to note here is the superb cast. Although I wasn't as won over by Buckley as some others seem to be, she's fine, this is generally a cast of great actors delivering great performances. Colman has been consistently superb for a long time now, way before any awards were handed over to her, and she continues to be arguably flawless in her main roles. Johnson has also been delivering great work over the past few years, outwith her work in the awful "Fifty Shades" movies, and she's excellent here. Ed Harris is a delight, playing the landlord/porter/islander who sees something in Leda that he responds to, and Peter Sarsgaard is enjoyable enough in a few scenes showing his character forming a strong connection with Leda over a shared love of linguistics. There's also a good supporting turn from Paul Mescal as Will, a young man who works at the sunny resort to earn some money in between terms. It's Will who warns Leda about the true nastiness of the people she got away with crossing once, and his character becomes more important in the third act. The story stays with Leda though, meaning most of the scenes focus on either Colman or Buckley.

It's the performances and the ideas in the script that helped to make this bearable. I'm afraid to say that very little else worked for me. Gyllenhaal does well in her choice to not spoonfeed the audience, allowing characters to behave erratically at times without making their motives obvious, but she indulges herself too often with an artistic and "breathy" approach to the shooting style that detracts from the bittersweet core of the film. Everything that isn't the actual acting, from the Dickon Hinchliffe music to the cinematography by Hélène Louvart, seems to be trying hard to undermine the acting. The film is a well-cast piece of work almost entirely undone by the pretentious errors of an earnest first-time feature director behind the camera.

As hesitant as I am to recommend this to people, it also remains just about worth your time. For now. There's a better film to be made about this, a film for anyone who has ever felt the urge to throttle someone saying "any children?" or "never mind, plenty time yet to start a family". Images of women defined only by motherhood are everywhere, it's a societal bias that I don't think will ever disappear, and art that fights back against that is important. It gives a voice to those who don't have that maternal urge, for whatever reason, and it reminds people that women are more than JUST wives and mothers.

The Lost Daughter could have easily been called The Lost Mother, The Lost Years, The Lost Love, The Lost Chances, or any of a dozen other titles. But it could also be referred to as The Lost Opportunity, subjectively speaking. 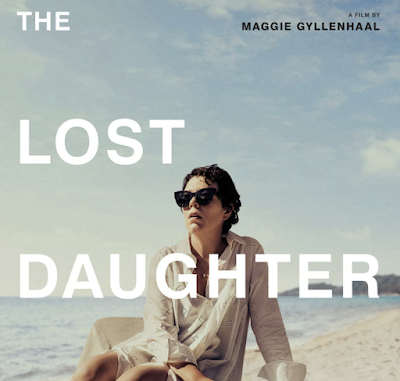