Co-written and co-directed by Dan Berk and Robert Olsen, who I didn't exactly love for their previous movie, Body (2015), Villains takes a now commonplace idea of two bad people stumbling into a household owned by some much worse people and has some twisted fun with characters all willing to do horrible things to one another in the name of self-preservation.

Bill Skarsgård and Maika Monroe are Mickey and Jules, respectively. They are small-time crooks, shown in the very first scene committing a messy and amateurish robbery. Making their getaway, it isn't long until their car runs out of fuel. That leads them to a seemingly empty house, one in which a little girl (Blake Baumgartner) is chained up in the basement. When the owners, George (Jeffrey Donovan) and Gloria (Kyra Sedgwick), come home then it's time to see who can keep the upper hand and resolve the situation in the way that suits them best.

Helped by the fact that they have a bit more to play with this time around, Berk and Olsen maybe viewed Villains as the movie that they would have made their debut, if only they had made the connections and extra resources back then. It's obviously a central idea that they saw potential in, and this comes much closer to achieving that potential than their last film did. The only big thing working against it is the fact that it's a bit of an overused trope nowadays. It's still fun, but we've seen it so many times throughout the past decade or so, from The Cottage to Monster Party, from Don't Breathe to The Owners, and many more. Some of these films are much better than others, and a big part of the success or failure depends on just how well the plot mixes in the dark comedy, nastiness, and characters to root for.

They can also depend on the central cast, which is a big plus here. Skarsgård and Monroe are excellent as the young crooks who find themselves suddenly way in over their heads, with the former an especially likeable doofus, and Donovan and Sedgwick are so ready to turn from absolute calm to absolute madness that you suspect they already have a number of bodies hidden away under the foundation of their house. The most fun is had whenever Donovan tries to remain calm and composed in the face of increasingly brash and stupid escape attempts by the youngsters.

Although I had fun with this, and REALLY appreciated the lead performances, Villains doesn't manage to be quite as good as most of those other titles I just mentioned above. And I am sure there are some other movies that I have forgotten to name-check that are in the same ballpark. But I'd find this an easy one to rewatch. There just happens to be many others that I would prioritise ahead of it. 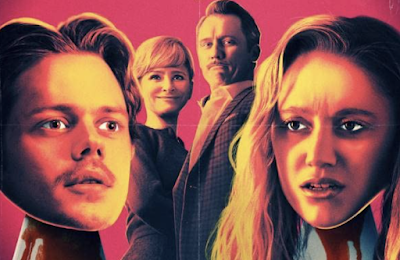