Greener Grass is, basically, a riff on Blue Velvet for the 21st century. Instead of the youthful figures at the heart of it however, it focuses on the slightly older parents, people who live in the very same blend of idyllic "perfection" and nightmare fuel without often realising what exactly they have done to get themselves into the Faustian pact that seems to have been made.

Co-directed, co-written by, and co-starring Jocelyn DeBoer and Dawn Luebbe, this is the tale of two women who start to see a real imbalance developing between them as one slowly starts to gain everything that she wants from the other. It all begins when Lisa (Luebbe) compliments Jill (DeBoer) on her gorgeous new baby. Jill, in a moment of extreme benevolence, offers the baby to Lisa. That's a minor pang of loss at the time, but things get worse when Jill starts to lose more and more of the components of her seemingly perfect life. There's a major incident with her son, Julian (Julian Hilliard), problems with her husband, Nick (Beck Bennett), and just all manner of awfulness that starts to pile upon Jill and ruin her composure.

To best describe the world in which Greener Grass is set, aside from the first paragraph (in which I think I pretty much nailed it . . . you're welcome), you can also take the "Cheddar Goblin" ad from Mandy and the brilliant and insane "Too Many Cooks" skit as reference points (both by director Casper Kelly). DeBoer and Luebbe often ground things in a world that is easier to believe actually exists, but it's just as prone to a sudden lurch into the world of the absurd, or even some outright horror. The other common ground they all have is the way in which they hit their targets with sniper-like precision.

From the many ways people either act blinkered, or mute, in an attempt to not rock the boat to the casual offers made in conversation that you don't expect people to accept (this film may begin with a "have my baby" bit of ridiculousness, but it's played out in the way you might be appalled if you hadn't done housework for a week and someone just turned up at your door because you'd once told them to pop round for a coffee any time). The effort to maintain a happy and content facade often feels like too big a price to pay for people who find themselves in a life they then cannot change, whether going through marriage troubles or dealing with a child who shows absolutely zero respect or restraint when throwing a tantrum in the home.

All credit here must go to DeBoer and Luebbe, who do superb work both on and offscreen. They are wonderful in the lead roles, all wide grins with fear and mild panic hinted at in their eyes, and they serve up their witty script in a world of bright colours and bubbling repression. It's a Douglas Sirk movie viewed after you've been slipped a tab of acid. DeBoer and Luebbe are well supported by Bennet and Neil Casey (who plays the other main husband, Dennis), as well as Hilliard, Ashler Miles Fallica (another problematic child named Bob), D'Arcy Carden (playing a schoolteacher) and many others joining in with the absurdity, including a scene-stealing Jim Cummings.

My only minor complaint is that this could have gone even further in one direction or another. Some scary moments could have been ramped up to make them even scarier. Some of the comedy could have been made even funnier. Then again, many other people will think that the mix here is absolutely spot on, and exactly what the film-makers were aiming for. I loved this. I cannot wait to see another feature from this talented duo. 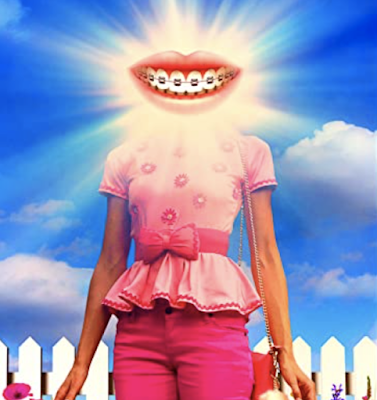