I was quite clear when I discussed In Search Of Darkness last year, a lengthy documentary about the horror movies of the 1980s. So many people loved it, and the only reason I can think of for that love is the shared affection for the genre, and a large helping of nostalgia. A lot of the contributors offered nothing more than the most basic opinions, there were very few films mentioned that weren't already very well known, and they angered me by crediting John Carpenter with that fine score for The Thing which came from Ennio Morricone.

Why would I dive into this sequel then? Well, I was hoping they might do better.

The format is pretty much the same. You get a lot of the same selection of talking heads (some better than others, and some make you question why they were chosen for involvement in the first place), you get plenty of clips from the movies being discussed, and you get some attempts to contextualise individual entries within the bigger picture of what was happening to the horror genre throughout the decade.

First of all, although the titles picked here are generally a bit less "mainstream" than the titles in the first instalment, this still almost steadfastly refuses to dive into the really dark recesses of the video selections from the '80s. A whole section could have been dedicated to Gremlins rip-offs, but instead they're simply name-checked by Joe Dante, who gets to state that he doesn't rate Ghoulies, but considers Critters the best of the bunch that came out about that time. Every time the camera shows a number of movie posters (or I guess they are supposed to be video covers), you get to see some more obscure titles before it zooms in to focus on the next film up for discussion, which is most often one that most horror fans will be familiar with. And a horror documentary full of movie clips spending some time discussing a previous horror documentary full of movie clips - Terror In The Aisles - seems both meta and also completely unnecessary.

I won't try to list some of the many notable omissions, as that would just be too depressing, but things are saved this time around by some sections that allow stars to discuss their careers. You get Nancy Allen On Nancy Allen, Tom Savini On Tom Savini, Robert Englund On Robert Englund, and Linnea Quigley On Linnea Quigley. These, alongside a section that looks at the horror movie videogames of the era, offer up just enough insight and enjoyment to make this a better film than the first instalment. It's also bittersweet to see some on-camera contributions from the late, great, Stuart Gordon.

If you enjoyed In Search Of Darkness then you're bound to enjoy this. It's more of the same. If, like me, you were in the minority then this at least improves things slightly. I have no doubt that a third entry would be possible, and it would be the same yet again. And I'll be bemoaning the fact that we horror fans seem to be so easily pleased sometimes by stuff put out there with minimal amounts of care and real insight. 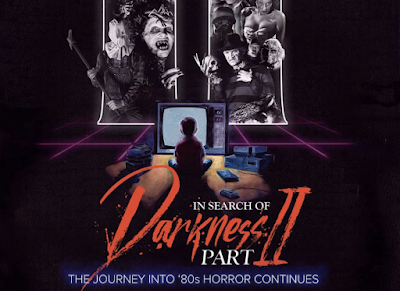