A documentary about Tilikum, a killer whale known for a history of aggressive behaviour, Blackfish isn't an attempt to demonise the creature at the centre of events. It is, rather, a harsh look at Seaworld, the way they treat the animals in their care, and the way that they treat their employees. The film also, due to the subject matter, reminds viewers of how little distinction there is between those who do wrong and those who stand idly by and allow such wrongdoing to occur. If people, or perhaps even just one person, had been determined enough to speak up and highlight the problems at Seaworld then there's a slim chance that tragedies may have been avoided. But a slim chance is better than no chance.

The whole thing starts with a major incident, something which isn't fully revealed to viewers immediately, but it's easy to figure out that something bad happened. Then we're taken back in time, given an ever-so-brief history of Seaworld and some other water parks in America. It quickly becomes apparent that the stars of the show - the killer whales - are also the very animals that should be left to enjoy their lives in the wild.

Using the traditional approach of many other documentaries, this mixes talking head footage (people talking to the camera, NOT footage of the band Talking Heads, just to be clear) with archival footage to create a full picture, and the end result is not a pleasant one. This isn't just a documentary that will have animal rights activists up in arms, it's something that will/should upset everyone.

Director Gabriela Cowperthwaite (who is also credited as a writer with Eli B. Despres and Tim Zimmerman, I'm assuming they pieced together the information and made the decisions on how the narrative would unfold) does a great job of piling detail upon detail until viewers, and even many of those in front of the camera, realise just HOW awful the whole situation is, leaving everyone to wonder how things were ever allowed to get so bad.

People are placed in jeopardy, lives are lost, beautiful creatures are scarred (both mentally and physically), and the waters of Seaworld will never look the same again. Blackfish is well worth your time, and I hope that the impact it made in 2013 is not forgotten a year or two along the line. 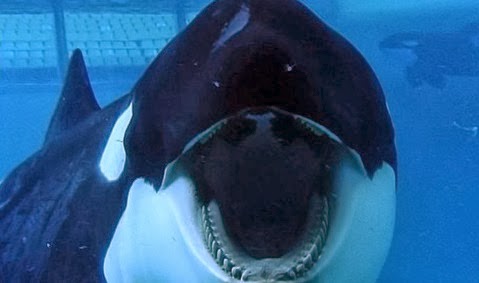