I don't think it's overstating the fact to say that Trainspotting was one of the defining films of the 1990s. Slowly but surely, almost everyone involved with the film developed a pretty successful film career (with Ewan McGregor, arguably, going on to be the most successful). Danny Boyle confidently delivered on that film-savvy potential that he'd shown with Shallow Grave. The soundtrack was one of the best of the decade, and the marketing and poster design is still being utilised to this day (even if it is usually used to push lesser Irvine Welsh adaptations, see Irvine Welsh's Ecstasy - or don't, actually).

The central storyline, although the film is more a series of interweaving strands moving back and forth between the main characters, follows Renton (Ewan McGregor), a heroin addict who starts the movie by vowing to clean up his act. This isn't the first time that he's tried to go clean, and it may not be successful, but he's going to try really hard this time. Unfortunately, normal life is just boring. Especially when his friends include Spud (Ewen Bremner), who's sweet but a bit useless, Sick Boy (Jonny Lee Miller), who comes off heroin at the same time just to show him how easy he can manage it, and the slightly psychotic Begbie (Robert Carlyle), who happily looks down his nose at the addicts while downing copious amounts of alcohol and smoking like a chimney. There's also Tommy (Kevin McKidd), but Tommy doesn't really have many vices or problems, which sometimes makes him the most annoying of them all. Of course, everyone may be a bit different by the end of the movie, affected in various ways by Renton and the decisions that he makes to get his life back on track. Or, at least, back on a track deemed suitable by society.

Having STILL not read the source material, which is a situation I really must rectify (as I am a big fan of almost everything I've read by Welsh), I can't really comment on what was kept and what was lost on the way to the big screen. What I can say is that the screenplay by John Hodge is just top notch. The characters are all fully fleshed out, the humour running throughout often helps to sugar-coat a bitter pill, and the fact that viewers stay on Renton's side, despite what a selfish asshole he is, shows just what a fantastic piece of work it is.

Of course, a lot of Renton's likeability comes from the winning performance from McGregor, who puts in a performance that remains one of his very best. Boyle is a director who often seems to get the best out of his cast, and this has rarely been more obvious than it is here, with everyone else onscreen stepping up to easily hold their own alongside McGregor. Miller, McKidd, Bremner and, especially, Carlyle all create characters that you won't quickly forget. Then there's Peter Mullan as Mother Superior (because of the length of his habit) and Kelly Macdonald, who enjoys such a fantastic cinematic debut that the rest of her career seems disappointing in comparison, despite the fact that she's been working solidly for the past 15+ years.

But let me save the last bit of praise for Boyle, once more. A man who impressed me with his debut feature, blew me away with this film, and has continued to delight and entertain me ever since. He brings everything together so perfectly, and with such apparent ease, that it's often easy to forget how dark a lot of the movie is. It's about a heroin addict, it features horrific violence, a number of moments focusing on fecal matter, there are at least two disturbing death scenes, and one sublimely-filmed OD sequence.

And then Born Slippy starts to play, the end credits roll, and you want to watch it all over again. 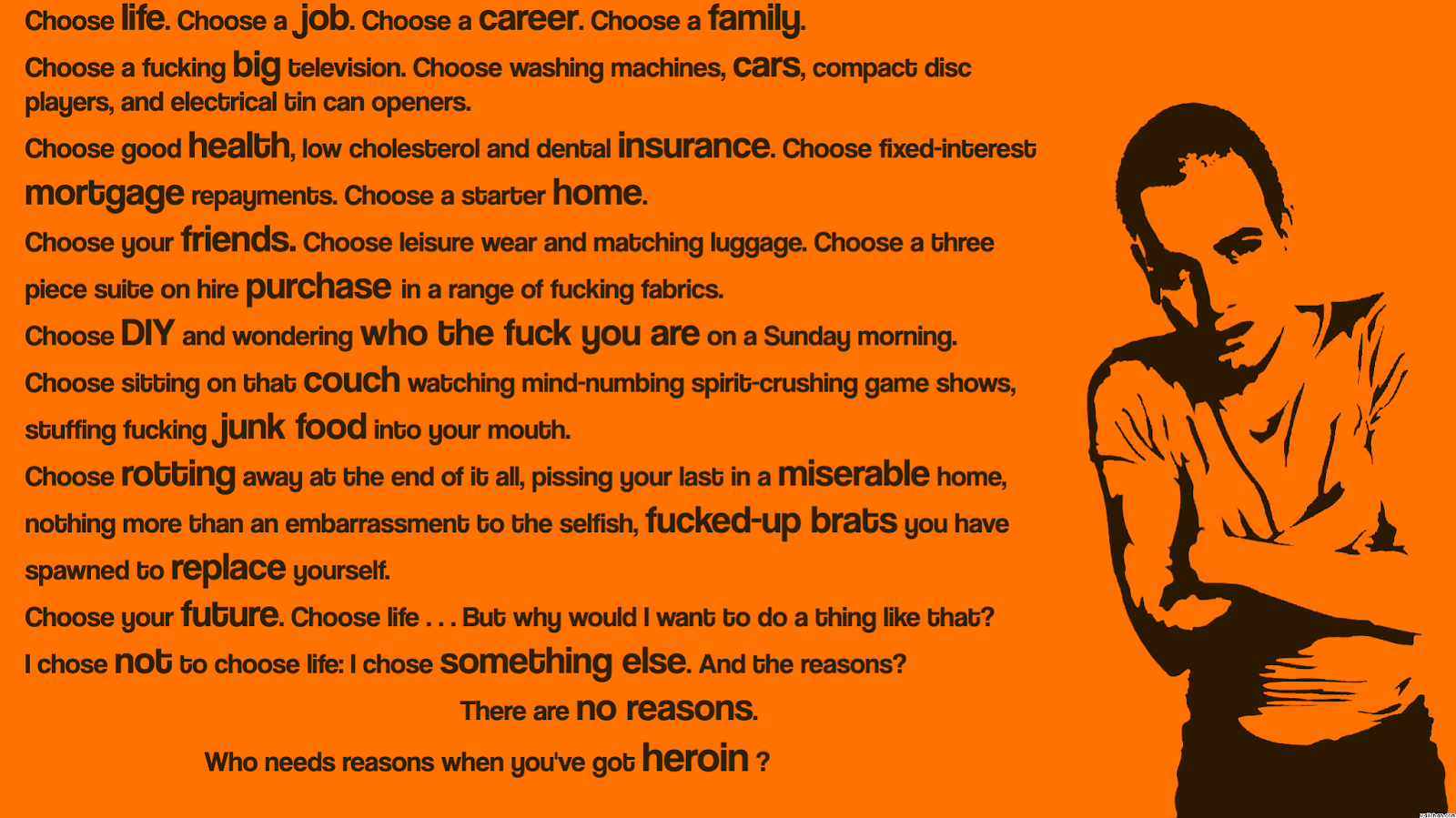