Another Hammer horror movie that takes its cue from "Carmilla" by Sheridan Le Fanu, this contains plenty to keep fans happy, and stands up as one of the better films to be spun off from the source material.

Ingrid Pitt plays Mircalla Karnstein, a young woman who ends up staying in the house of General von Spielsdorf (Peter Cushing) and repaying his kindness by feeding off his daughter. Then, when she's had her way with the available blood, Mircalla manages to get herself placed in a household that also contains the lovely Emma (Madeline Smith) and her governess (Kate O'Mara). Twice the food supply. If she's not found out for what she really is.

Pitt is just wonderful as Mircalla, beautiful and sexy and dangerous and pretending to be laughably innocent at times. She is, however, just one of many beautiful women onscreen, and Hammer really filled out this movie with gorgeousness. Smith is another beautiful actress, O'Mara has a softness to her features here that I've never seen before, and Pippa Steel, as the daughter of Cushing's character, is yet another image of loveliness in a film that is, in some ways, an embarrassment of riches. Okay, so the menfolk may not have the same allure, but Cushing is welcome in any movie, no matter how small the role (and he's only in this for about a quarter of the runtime), George Cole is decent enough as Roger, the father of Emma, and Douglas Wilmer is good fun in his role, the one man who knows the full horror of the situation, and also what is needed to resolve it.

Some may roll their eyes at the fact that this movie is aimed, first and foremost, at anyone who will be won over by the physical charms of Ingrid Pitt, but as I am one of those viewers I can only rate the film as a wonderful success. 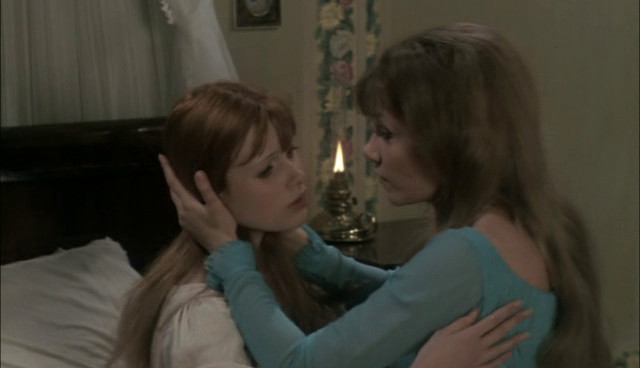