Written and directed by Matt Mattson and Maclain Nelson (who also star in the movie), Vamp U is an enjoyable comedy that highlights the perils of love and potential immortality in the long lifespan of a vampire.

Adam Johnson plays a vampire named Wayne Gretzky. He hasn't been able to bare his fangs since he accidentally killed his loved one (Julie Gonzalo) many years ago. Thankfully, he's been able to lead a relatively normal life, teaching history at university. But everything starts to get complicated when he spots a young woman (Julie Gonzalo) who looks just like his deceased love. It's not long until one or two people are bitten and the students look in danger of suffering some major blood loss.

There have been a number of vampire comedies over the years, some of them pretty good and some of them called Vampires Suck. Thankfully, Vamp U is a good one.

The central performances all help a lot, with Johnson and Gonzalo both having a lot of fun in their roles. Mattson and Nelson also do just fine onscreen, never seeming to fall into that trap that some writer-directors fall into - creating a movie to give themselves all of the best moments. And there are fun supporting turns from Bart Johnson, Alexis Knapp and, in particular, the great Gary Cole, who has a lot of fun as a man who knows the truth about his vampiric friend.

The direction is fine, with everything nicely polished and professional despite not having a huge budget to work with (I assume). The script isn't full of one-liners to make you double over while laughing, but it creates a fun story for the central characters, develops everything well, and includes some nice running gags. This is about the characters more than the dialogue, but the balance works out nicely in terms of entertainment value.

Vamp U may not be the most enticing movie title you'll have seen recently, and it doesn't have a cast full of A-listers, but give it an hour and a half of your time and you might just end up as amused and entertained as I was. 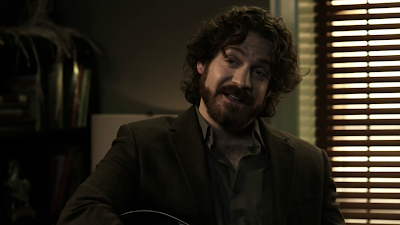