Mausoleum is completely bonkers, but in that brilliant way that so many horror movies from the '70s and '80s were. It doesn't worry about everything making sense, it makes little attempt to keep things grounded in reality, and it throws around some decent gore moments and gratuitous nudity (provided by the lovely lead actress, Bobbie Bresee).

The story begins with young Susan (Julie Christy Murray) upset by the death of her mother. She heads off into a mausoleum, where she encounters a demonic presence that will alter her for the rest of her life. Fast forward to many years later, and we meet up with the adult Susan (Bresee), a woman who doesn't realise how much darkness she has inside, waiting to take over when the time is right. Susan's aunt (Laura Hippe) is concerned for her, her husband (Marjoe Gortner) also starts to worry, and a doctor (Norman Burton) eventually decides that he needs to start doing more to look after his patient. But it might just be too late.

Written, in various degrees, by Robert Barich, Robert Madero and Katherine Rosenwink, there's nothing in the script that's going to hold up as a prime example of great dialogue. It's pretty crude and clumsy, but that's easy to forgive when the whole thing is so well paced. Viewers are never too far away from some gore, nudity or even genuine creepiness (and it IS creepy at times). Director Michael Dugan may not be a master of his craft, but he knows what will keep the more easily pleased horror fan . . . . . .  easily pleased. Yes, I count myself among that lot.

Bresee is charming in the main role, and she's not that bad in the acting department, despite the fact that she was probably chosen more for her physical appeal (she certainly does better than the hilarious LaWanda Page, who plays the maid, and has one scene that stands out as a piece of comedy gold). Gortner is very bland as the husband lucky enough to be married to such a gorgeous woman, Hippe doesn't get much time onscreen, but overacts as much as possible when she DOES appear, and Burton manages to keep an admirable straight face throughout, even as everything gets more and more far-fetched.

I really liked Mausoleum, and not in a cool and self-aware way. It has a lot of flaws, but it also delivers the goods for horror fans and comes up with at least a few moments that are effectively disconcerting. If you can get your hands on it, I recommend giving it some of your time.

Keep your eye out for a better transfer/release, but here is what we have available in the meantime - http://www.amazon.co.uk/Mausoleum-Beyond-Terror-Bobbie-Bresee/dp/B0031A1ZWI/ref=sr_1_1?ie=UTF8&qid=1389884311&sr=8-1&keywords=mausoleum 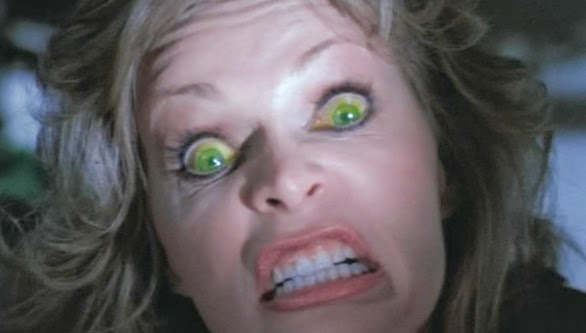