A bizarre, and not entirely successful, collaboration between William Castle and Hammer, The Old Dark House is a remake of the 1932 movie of the same name, but with a number of changes bringing it closer to the likes of Carry On Screaming! or What A Carve Up.

Tom Poston plays Tom Penderel, an American car salesman who is invited by his room-mate (Peter Bull) to join him at his family estate, an old, dark house out in the middle of nowhere. When Tom gets there it seems that someone has raced to get there ahead of him, and that someone is death. Yes, Tom's room-mate has shuffled off the mortal coil by the time he arrives, leaving the poor man stuck amongst quite an odd selection of individuals, all of them making up the Femm family.

As endearing as it is bizarre and clumsy, The Old Dark House is certainly one of the stranger "horror" movies released by Hammer (and, yes, I know that is saying something). Unfortunately, it falls between two stools. I would have liked to see either more of the movie played straight or, at the opposite end, quirk piled upon quirk to create an even stranger atmosphere from start to finish.

Castle directs with his usual taste for the bombastic, and the script by Robert Dillon (based on the novel by J. B. Priestley) works fairly well for the tone of the piece, allowing the cast to roll their eyes and go over the top at every available opportunity while the house creaks and drips and enshrouds them.

As for the cast, Poston is just fine in the lead role, but it would have been fun to see a more talented comedic actor in the role, reacting to the strangeness around him. Robert Morley is as good as ever, but sorely underused as the head of the household, Joyce Grenfell is a delight, Janette Scott is also wonderful, and Fenella Fielding puts in yet another sultry performance. Mervyn Johns and Peter Bull also deserve a mention for their fun turns.

I'd advise most people to visit the original movie first, which is almost always the best advice anyway, but this movie is worth your time. Once. 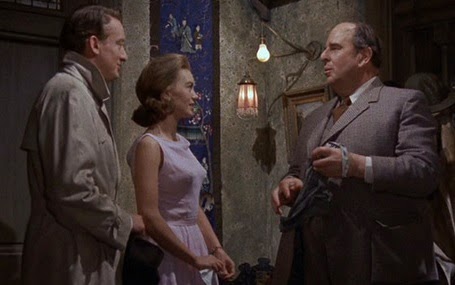