Another day, another found footage movie, this one is a sci-fi horror about a manned expedition to Europa, Jupiter's fourth largest moon. Those who disliked Apollo 18 will want to avoid this one, but it has to be said that both films provide an equal end result in very different ways.

Embeth Davidtz plays the main person telling the full story to viewers, a story that is signposted from the very beginning. The crew heading to Europa - played by Anamaria Marinca, Christian Camargo, Sharlto Copley, Michael Nyqvist, Daniel Wu and Karolina Wydra - are all hoping to gather some data that could potentially change the perception of our known universe, and to show the prospect of life existing somewhere other than on our own planet.

With a number of enjoyable details throughout, Europa Report somehow manages to hold viewer attention even during the many scenes in which nothing much is actually going on. Director Sebastian Cordero presents everything in a very matter-of-fact way, and the stylistic choices certainly help, but the main strength of the film lies in the script by Philip Gelatt, building up a very complete picture of the main characters and the strange situation that they find themselves in.

All of the cast do decent enough work, with Copley and Nyqvist being the best of the bunch, and they are eventually given enough to differentiate themselves from one another, just in time for the developments in the second half of the movie to have a bit more impact.

More of a valiant effort than a truly great sci-fi horror, Europa Report is one that I'd recommend giving your time to, but it's not necessarily one that will be appreciated by many fans of the blended genres. It does, however, have enough positives subtly mixed in to make it a quality piece of work. It's just a shame that it couldn't also be a bit more entertaining throughout. 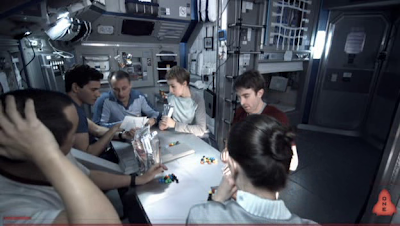