Gary Busey plays Buck Matthews, a man so tough that his entire character is defined by those two things. Okay, he's also just out of prison (where he didn't deserve to be, goddammit) and he was quite the champ in his years of military service. When he returns home, he finds a town that is being terrorised by a bunch of violent bikers. The local law enforcement don't seem to be doing much about it, so it's up to Buck to teach them a lesson that they won't forget in a hurry. Unfortunately, the bikers take their opportunity to exact some revenge and before you can say "did they name this movie JUST to use that Survivor song?" it's time for a bit of a one-man war.

Directed by Richard C. Sarafian, and written by Michael Thomas Montgomery, Eye Of The Tiger is a very pure film experience. It's a lean, mean tale of revenge that benefits from a great leading man (during the years when he was just the right side of sanity, apparently) and a solid supporting cast, including Yaphet Kotto in a particularly enjoyable turn, Seymour Cassel and big, bad William Smith. Denise Galik and Kimberlin Brown may have less to do, but they are actresses in a testosterone-filled '80s action flick, so whatyagonnado? Young Judith Barsi, as the daughter of our hero, doesn't have a lot to do either, but I had to mention her here after I was saddened to find out that she died (cause of death - homicide) not long after her tenth birthday, just a couple of years after this movie was released.

Busey has, quite simply, rarely been better onscreen (and let's just take a moment to remember how many great performances he's actually given, all too easy to forget as he weaves a cloak of self-parody around himself in the 21st century). He's a man who wants to stand his ground, and he's often in the right, despite what odds may be stacked against him. As things wind towards an inevitable, and satisfying, finale the whole movie delivers a well-executed dose of righteous machismo.

I'm not going to pretend that this is high art, but I will emphasise that it's all put together almost perfectly for what it aims to be. The script sketches out characters, but fleshes out enough little details to make viewers invest in every confrontation, while Sarafian's direction delivers some great moments, with the perfect pacing of the film leaving plenty of room for impressive stuntwork and set-pieces in between the more predictable beats.

And then, of course, there's THAT great song being put to good use. Enjoy. 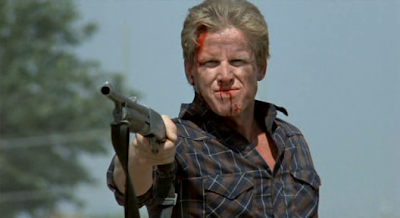