The Invisible War is a documentary about rape, and other assaults, in the military. All of the horrible attacks featured, or 99.9%, are committed against military personnel by other military personnel. And, very often, the same person who committed the crime is either let off the hook or, worst of all, part of the chain of command that the victim must go through to report the crime. It's an appalling, a real stomach-churning, situation to even begin to imagine.

Director Kirby Dick puts together a number of people willing to share their worst memories on camera - including Kori Cioca, who received a severely damaged jaw alongside her rape (neither of which have been acknowledged, or fully dealt with, by the military), and Hannah Sewell, who had her virginity stolen from her by her attacker - and intersperses their horror stories with statistics that underline the bleak inevitability of most of these attacks never being properly dealt with, alongside other interviews with people who acknowledge and want to change the situation, and people who have seem to keep blinkers on, despite being in a position that could actually allow them to help effect some positive change.

As a revelatory piece of work hoping to make a real impact on the situation that's being documented, this is a 10/10 experience that punches the viewer in the gut while building up a picture made up of truly horrendous statistics (I think we can all agree that even one rape is one too many, and the figures being dealt with here are far beyond what any civilian would expect to see). The only reason that I can't actually rate this as a perfect, or near-perfect, documentary is simply because it covers the same ground over and over again, which really hammers home the situation that many of the victims find themselves in but fails to make enough people squirm when the chance is available. That squirming does happen occasionally - most notably when Dr. Kaye Whitley is questioned about the more-than-useless Sexual Assault Prevention and Response Office - but not often enough, and not with anyone of real consequence (Whitley had stepped down from her role by the time the documentary was completed, perhaps due to someone with sense realising what a stupefyingly ludicrous liability she was as a spokesperson for SAPRO).

I've always held a deep mis-trust of powerful forces that are also responsible for regulating and policing themselves, and The Invisible War highlights why it's not necessarily a bad thing to be so mistrustful. People who get a taste of power can also, all too easily, get a taste of how to let that power corrupt them. This may be about appalling assaults and rapes, but it's equally about insidious gender bias, individuals given far too much power, and deep-rooted corruption that stinks so bad that you'll notice the fumes emanating from your TV screen as the end credits roll (complete with sickening footnotes).

NB - Anyone thinking that I've used the screenshot below out of context? That's how it is put in the documentary, but in the appeal transcription it is put like this: "Defendants argued, in essence, that unpunished rape and sexual assault should be viewed as “incident to service” -- i.e. an occupational hazard-- for those who join the military services. Defendants argued that the federal courts are not permitted to adjudicate whether they violated the law because doing so would intrude upon military discipline" - full transcript here. 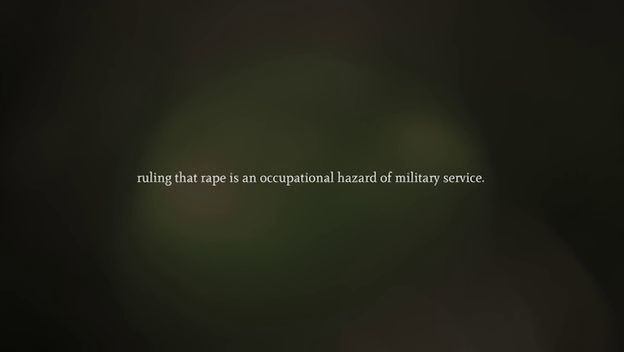