A political comedy starring Will Ferrell and Zach Galifianakis as two very different men running against one each other to see who will become the congressman for their hometown.  Ferrell is Cam Brady, the more experienced and ruthless of the two. He's been unopposed for a long time, able to get away with pretty much anything he likes (including some obvious infidelity and lewd behaviour). Galifianakis is Marty Huggins, a simple man who doesn't realised that he has only been picked because a couple of immoral businessmen (played by John Lithgow and Dan Aykroyd) think that he will do whatever they ask of him once he's in a position of power. When Marty first steps forward it seems like some kind of joke, but thanks to some help from Tim Wattley (Dylan McDermott) and the courage of his convictions, Marty soon turns things around to make Brady and his advisors more and more concerned.

While it may lack the big laughs of Tin Men or Used Cars, this is a film very much in that ilk. It may favour dumb fun over smarter gags, but that doesn't make it any less enjoyable. In fact, Ferrell and Galiafanakis both get a chance to play characters close to many that they have played before, with the former being an ass, with arrogance only matched by his stupidity, and the latter being mistakenly written off as nothing more than a dim-witted schlub. They're helped by a great supporting cast, including Brian Cox, Jason Sudeikis, Sarah Baker and Katherine LaNasa, as well as those already mentioned. Baker and McDermott are the standouts, in two very different performances, but everyone does a great job, and it was especially good to see Aykroyd in a role not a million miles away from that of the two conniving businessmen in Trading Places.

The script, by Chris Henchy and Shawn Harwell, laces all of the easy laughs with some salient points and observations, both in general terms when it comes to the world of politics and in relation to specifics that show up what uneasy bedfellows big businessmen and politicians make. It's no surprised to see that Adam McKay helped to come up with the story, considering what he and Henchy were able to come up with for The Other Guys.

Director Jay Roach has been helming comedies for a long time now. Even if he doesn't quite elevate this to comedy gold, it's clear that he knows what he's doing, and the end result is a film deserving of more fans. If you like either of the leads, or if you like comedies that remind viewers of just how childish things can get in the political arena, then this is definitely worth your time. 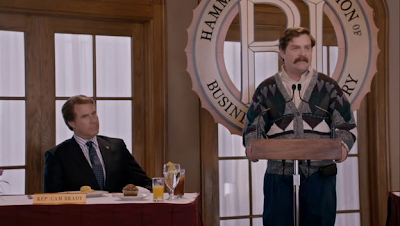