So I thought I knew what I was getting into when I went to see Ridley Scott's take on Robin Hood at the cinema. I was in safe hands, surely. Russell Crowe in the central role (who does well but provides a strange Geordie/Glaswegian accent for the part), Cate Blanchett as "Maid Marion" (excellent), the fantastic Mark Strong as the baddie, other roles given to the likes of Max Von Sydow, Oscar Isaac, Eileen Atkins, Léa Seydoux, William Hurt, Matthew Macfadyen, Danny Huston, Kevin Durand, Scott Grimes and Mark Addy amongst others. All of them are at least very good, most of them are excellent. A screenplay by Brian Helgeland. It all seemed so good. I mean, good grief, there isn't one Ridley Scott movie I can think of from the past 30-40 years that I've actually disliked.

Which makes it all the more disappointing that this movie was a bit of a misfire. Its greatest strength (the talent behind and in front of the camera) proves to be its biggest drawback. This movie coming from anyone else would have been alright. But coming from people I expected so much from means that, despite one or two great moments here and there, it just doesn't cut it. No sir.

The story, for those unaware, is all about how the man we came to know as Robin Hood actually became the famed outlaw we all love to this day. This is not a tale of daring archery contests, no cocking a snoot at some panto baddie here, this is an origins tale.

Which is a great shame because when the movie gets close to some swashbuckling fun it then pulls back just when things are about to get entertaining. Does this make me a shallow audience member or am I simply suffering because Ridley Scott wants to have his cake and eat it in so many ways? He wants the "reality" of the story yet laces it with wonderful, cinematic moments. He wants actual characters instead of caricatures and then makes the decision to portray Marion (after such a good number of scenes pitching things perfectly) as a much-too-progressive spirited fighter. Not to mention the bizarre inclusion of "the lost boys" for reasons best known to himself.

As good as it gets in places, and it does get very good, it all feels like a movie that had to be made just to get a greenlight for the sequel, a film featuring all of the antics and swashbuckling fun we love about Robin and his men in tights (surely).

It's definitely not the Gladiator 2 that many lazy critics tagged it, neither is it an actual, fully fledged, Robin Hood movie. Ironically, this feels very much like Robin Begins.

NB. The Bluray, as expected, is a nice package. While there's not enough in the mix to make it worth a purchase if you hated the movie, there's plenty to enjoy if, like me, you liked parts of the film, and wanted to like it more. 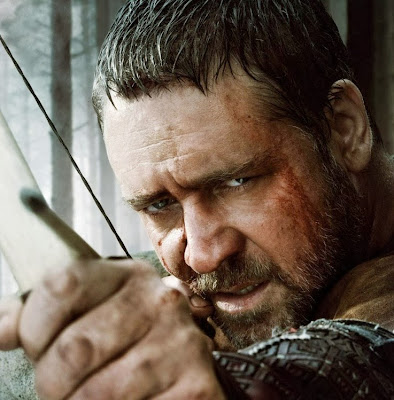