This movie contains so many things that I love that I can't believe I hadn't managed to see it any sooner. Sherlock Holmes, Peter Cushing, Christopher Lee, a seemingly supernatural mystery, this film made me smile within the first few moments (standard upper class Hammer characters being horrendous to some standard Hammer peasants), and that smile just got bigger and bigger as the movie went on.

Cushing plays the famous Baker Street detective, and what a great performance it is. Is it Cushing's best performance? No. Is it the best version of Holmes I've ever seen? No. But, somehow, it's just wonderful enough to watch Cushing being Holmes, and it helps that he's given great support from Andre Morell in the role of Dr. Watson. Christopher Lee is Sir Henry, the man who may fall foul of the curse that has claimed others before him, death caused by a devil hound.

Director Terence Fisher does a great job here, of making both a fun Hammer movie and also a fun Sherlock Holmes movie (although, to be fair, this tale is one of the more Hammer-friendly tales that they could develop for the screen). Writer Peter Bryan takes the story (by Arthur Conan Doyle, of course) and does just enough to tailor the whole thing to the stars without changing too much of what is already a recipe for success.

In case you couldn't tell from my comments above, I think the casting is pretty much perfect. Cushing puts in yet another effortlessly graceful performance, portraying a character well suited to his personality, while Morell is actually one of the better Watsons I can think of. He's certainly in the top tier. Lee gets less to do, but acquits himself admirably, while Francis De Wolff, Marla Landi, Miles Malleson, Ewen Solon, John Le Mesurier and Helen Goss all do their bit to stand out from the other supporting players. De Wolff and Landi are the two who stand out, but nobody disappoints.

It's hard to present such a well-known tale in a way that seems fresh and completely entertaining, but this certainly tries hard, and largely succeeds, thanks to the writing, direction and the great casting of the lead roles. Get those things right and the end result is guaranteed to be enjoyable. That's elementary. 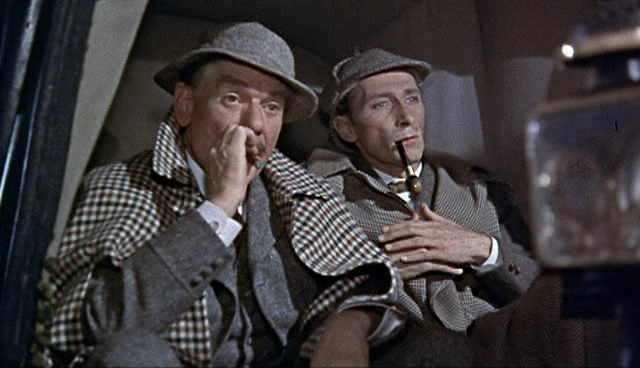