Sexy Evil Genius is a great title in search of a great movie. The film itself isn't bad, but it's yet another in a long line of movies that isn't quite as cool or funny or hip as its creators would have everyone believed. It's a decent distraction for 90 minutes, but nothing worth revisiting, and certainly not one that will be brought up by film fans reminiscing a few years further down the line.

Seth Green, Harold Perrineau and Michelle Trachtenberg play three people brought together by Katee Sackhoff (playing Nikki Franklyn, the sexy evil genius of the title). They have been asked to wait at a bar at a certain time, and they have all obliged. When Nikki eventually appears she is accompanied by a rude and corrupt lawyer (played by William Baldwin). But, more importantly, she also has a plan. A plan that started falling into place as soon as her friends started to arrive at the bar.

Written by Scott Lew, the premise and pacing of Sexy Evil Genius may appear achingly desperate to be cool, but the dialogue isn't actually all that bad. At least, it's not bad during the first half of the movie with the three strangers getting to know one another. Things take a bit of a dip, however, when Sackhoff appears and Lew seems to free himself from his previous self-restraint, investing the titular character with all of the attitude and soundbites stereotypical of so many other movies that have tried to score themselves lots of cool points. It's clear that Lew cares about his creation, and also clear that he cares about her a bit too much, to the detriment of the others who are simply pawns.

Director Shawn Piller doesn't do a bad job at all, considering that the movie is mainly just a group of people talking to one another around a table in a bar. He doesn't really do much to detract from that fact, but he doesn't make it into a tortuous exercise either.

The casting helps a lot, something I never thought I'd say with Trachtenberg onscreen (I'm not her biggest fan). With so few characters holding the attention of viewers for the duration of the movie, they have to be easy enough to like, and they are. Trachtenberg is just the same as she always is, but that works this time. Perrineau is one cool cat, and Green is, well, he is also the same as he's been a number of times before. Again, no problem as it works here. Baldwin is enjoyably sleazy, and the only real weak acting onscreen comes from Sackhoff, but I'm not sure whether that's her fault, as she breaks out the manic tics and tricks, or perhaps the fault of the writer.

Sexy Evil Genius isn't a complete waste of your time, but it doesn't do enough to stand out from the crowd. You may enjoy it for 90 minutes, but you won't feel as if you've missed out on some gem if you end up never seeing it. 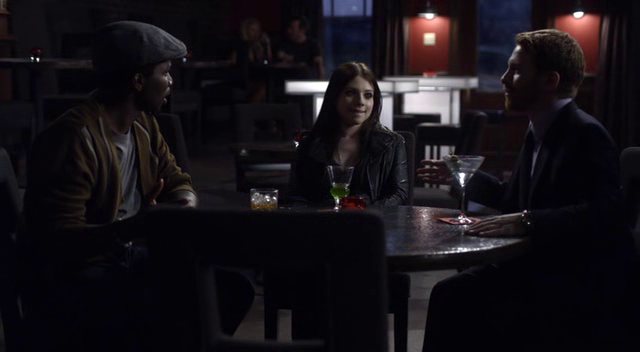