Unjustly overlooked by fans of fun animation, Chicken Little remains a firm favourite of mine and provides a great mix of cute, wacky and outright crazy.

The basic story is all about our titular character (voiced by Zach Braff), an innocent chicken who finds himself the butt of many jokes when he mistakenly tries to warn people that the sky is falling after something hits him on the head. The crowd that gathers around him assumes that it was just an acorn. It wasn't, but just how will Chicken Little manage to convince everyone that he is the only one who knows the worrying truth. Perhaps his friends - Runt Of The Litter (Steve Zahn), Abby Mallard (Joan Cusack) and Fish Out Of Water (Dan Molina) - can be of some use. Perhaps.

Rattling along at a great pace, Chicken Little marries lovely visuals to a multitude of great gags, big and small, and also throws in the usual Disney life lesson. Thankfully, the life lesson part isn't overdone and plays perfectly for the intended audience while the laughs keep coming thick and fast.

Lots of people had a hand in forming the screenplay and adding dialogue, including director Mark Dindal, but this doesn't leave the movie feeling overcrowded. On the contrary, Dindal in his directorial role makes sure that everything feels perfectly paced and balanced.

A film that doesn't deserve to be so easily forgotten and/or dismissed - give Chicken Little a viewing and find out how enjoyable it is for yourself. 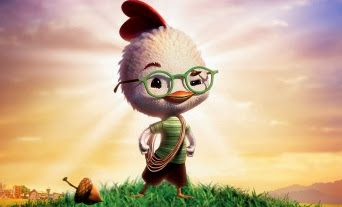