Based on a bizarre true story, American Animals presents viewers with arguably the most incompetent heist in modern times. The film boasts a couple of excellent lead performances, and is helped by the way in which it intercuts the fictionalised depiction of the planning and execution of the crime with comments from the real people involved.

Evan Peters and Barry Keoghan are, respectively, Warren Lipka and Spencer Reinhard, two young men who come up with a half-assed plan to steal some very valuable books from a university library. They rope in two friends, Eric Borsuk (played by Jared Abrahamson) and Chas Allen (played by Blake Jenner), and rush to put their plan into effect, which is when one thing after another starts to go wrong.

I know that nobody ever believes me when I say no pun intended but, honestly, there's no other way I can think of continuing this review without asserting that American Animals is a strange beast indeed. The comments from Lipka and co. often feel like an opportunity for them to somehow deflect responsibility away from themselves, although the juxtaposition is also used to comedic effect when someone wants to point out that they recollect things differently to the way they are being shown. It's a tightrope, tonally, that is skilfully handled by writer-director Bart Layton (nicely blending the narrative with footage more in line with his documentary background - be sure to check out the similarly murky waters of The Imposter).

Peters and Keoghan both do great work, one being far more confident in his abilities than he should be while the other is a bag of nerves at every step of the way, and Abrahamson and Jenner are good fits in their roles. Both Ann Dowd and Betty Jean Gooch (the person Dowd portrays) deserve a special mention, the main librarian who also became the central human victim of the crime, and her participation on the film helps to serves as another reminder that, despite how farcical it became, this was a crime that had consequences.

It's easy to understand why some might view this as something slightly distasteful, especially during the first half, but I would encourage people to watch it, and stick with it. It eventually peels away the layers of optimism and fake attempts to seem confident and cool, showing that this was nothing more than a group of young adults who took a stupid idea too far. The pain resulting from the crime may have not seemed obvious to them at the time, being far too concerned with making a success of their plan and evading capture, but it soon starts to sink in, both in terms of the one person they traumatised directly and the way they shocked and upset their families.

Part comedy, part crime film, part documentary, all astonishing, American Animals is well worth your time. It doesn't glorify the people involved, but it does allow themselves to try and paint things in a better light before the weight of the reality of the situation pushes them further and further down, forcing contemplation and re-evaluation of how they view(ed) themselves.

American Animals is available to buy here.
Americans can buy it here. 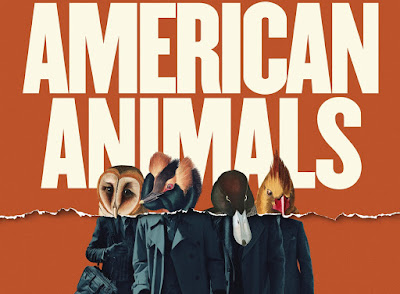