Despite strong competition, Another Evil is one of the strangest, and least satisfying, films I have yet watched on Shudder. Written and directed by Carson Mell, his feature debut, this thing is such a mess that at times it's almost like watching a car crash in slow-motion. It gets worse and worse, you can't look away, but you just hope that it's all going to work out in the end. And then the end comes along.

Steve Zissis plays Dan, an average guy who finds that his house isn't very average. It has a supernatural presence inhabiting it, one that is now determined to make itself known. This eventually leads Dan to hire Os (Mark Proksch), a man who might just be able to clear the spirits and help him get his life back to normal. Or, as soon becomes clear, maybe not.

PART of my adverse reaction to Another Evil was my own fault. I thought I was going to be watching some crude, low-budget, horror comedy. I was prepared to overlook some rough edges if the material was clever or witty enough. But this isn't that kind of film. It is, instead, something much more similar to a film like Observe & Report, and people who know that before the movie starts might end up enjoying it a bit more. Might.

The problems start to become apparent quite early on. Mell doesn't nail down the tone, focusing on one aspect at a time when he should have found a way to mix everything together. There are intriguing elements here (the haunting, the mental health of Os and how it may or may not be linked to his skills, and how far people are willing to go along with someone they perceive as an expert/savior) but none of them are blended together into a wholly interesting movie, which this needed to be. The ambiguity that Mell thinks is a positive think ends up hurting the film, especially during the final scenes that prove to be completely unrewarding to patient viewers.

Zissis and Proksch are fine in their roles, with the former better served by the script that simply requires him to be a normal guy pushed into abnormal circumstances. There are other people onscreen, but this is mostly a two-hander between the male leads, and they do what is asked of them, which makes it inevitable that Proksch becomes more and more irritating as the movie plays out.

It's almost impossible for me to figure out who would actually appreciate this. It's not got enough atmosphere or scares for anyone looking for a horror movie. It's nowhere near funny enough for anyone wanting a comedy. And the psychological drama, the serious content at the heart of it all, isn't fully-formed, and what little is there is just drowned by the rest of the nonsense. This is a sad failure on almost every level, although it's made with a degree of competence that means I have to begrudgingly admit it is not amongst the worst films I have ever watched.

Americans who somehow like this movie can buy it here. 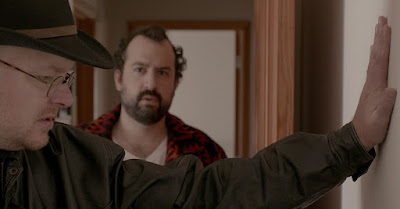