Mila Kunis plays Audrey, a young woman who is upset on her birthday when she is dumped by her boyfriend (Drew, played by Justin Theroux) through the callous medium of text message. This leads to a chain of events that see Audrey and her best friend, Morgan (Kate McKinnon), getting drawn in to a plot that includes spies, violence, death, and lots of comedic banter between the two out-of-their-depth ladies.

We've had a few action comedies in the past few years, and Melissa McCarthy has given us some big laughs in two of them (Spy and The Heat). The Spy Who Dumped Me tries to give things another twist, but it ultimately relies on the two leads more than the script or direction, and that's not enough to make this memorable.

Director Susanna Fogel, who also co-wrote the movie with David Iserson, may not be an absolute first-timer here but you could be forgiven for assuming that she is. This is a film riddled with amateur errors, although it has enough weight behind it, and polish, to keep it as an enjoyable disappointment, as opposed to a complete disaster. The script doesn't have enough laughs (I probably laughed aloud at about two lines, and they may have been in the same scene - an interrogation sequence), the action feels a bit carelessly planned out, and it's hard to care about any of the twists and turns that occur.

Kunis and McKinnon are two great actresses, but neither of them are well served by the script that they're given here. McKinnon suffers more, with her character often coming across as annoying and unhelpful throughout (bar a couple of moments that make her useful out of the blue), but Kunis just never feels like the best fit for the character that she's supposed to be playing. The men generally fare better, perhaps because they're all being made to look arrogant and shifty most of the time, with Theroux decent fun, and Sam Heughan and Hasan Minhaj just fine as the other agents who may be good or bad. Paul Reiser and Jane Curtin are a welcome addition, and could have done with some more screen time, and there are good performances from Gillian Anderson and Ivanna Sakhno (playing, respectively, an agency boss and an ex-gymnast turned assassin).

The Spy Who Dumped Me isn't a bad film. It's just not a very good one. And the fact that it has too few laughs, action scenes filmed quite badly, and leads who don't feel quite right in their roles make it a  bad action comedy. I REALLY hope someone makes another great vehicle for McKinnon soon, because I tend to enjoy her performances, even when she's given weaker material, and it would be a sin if we were denied her comedic talent because nobody figured out how to make the best use of her in movies.

You can buy the blu here.
Americans can get it here. 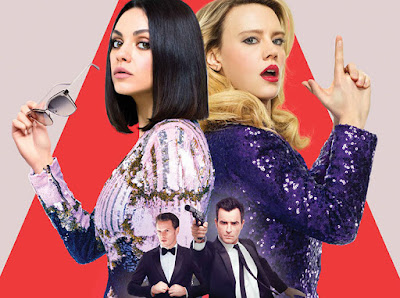