If there's one thing that British cinema can do it's explore damaged individuals in a cloudy, tempestuous, dreary landscape that reflects the mindset of the featured character. And here we have Dark River, a film that begins with news of a death and quickly reveals that there isn't all that much life left in a couple of people who are resolutely clinging onto this mortal coil.

Ruth Wilson plays Alice, a woman who, after being informed of the death of her father (Sean Bean), heads back to the family farm for the first time in years. She wants to get it all back in order and move forward with the whole endeavour, which doesn't impress her brother, Joe (Mark Stanley), who has spent many years getting his hands dirty while his sister stayed away. It's not long until the two siblings butt heads, with anger and resentment bubbling up to create a mixture that could explode at any time.

There aren't really any surprises in Dark River, in terms of the main plot developments. Most viewers will know what is coming from the very first scenes. That's not a problem, however, when the film is carried by two performances as fantastic as those from Wilson and Stanley. The former is a bit ahead of the latter, but both do excellent work here. You get a selection of supporting cast members, and Sean Bean appears here and there in flashbacks/visions, but the film really belongs to the two leads, and they make the most of the opportunity.

Director Clio Barnard (adapting the novel by Rose Tremain) takes what could have been an unrelentingly grim experience and manages to make it more bearable, somehow, showing the surrounding land to have more to it than just what is visible to the uninformed viewer, the necessarily hands-on relationship that the leads have with the environment and animals, and the strong bond between brother and sister that is still there, despite all of the heated emotions that they direct at one another.

Dark River covers familiar territory (funnily enough, one movie that came to mind while I was watching this was another with river in the title, Mystic River) but does enough to separate it from other works. A large part of that is down to the central performances, but an equally large part of it is down to the fact that so many moments show this as being from someone, either in the source material or the translation of it, who actually understands how people can react to others around them while trying to process an intense trauma from their past that will never leave their thoughts.

Sometimes you get angry enough to lash out at those closest to you, sometimes you are a jangling bag of nerves, and sometimes you just wander in a field until you fall down, lying there while the rain continues to pour down upon you while your breath hitches and you hope the end may have come at last. This movie shows all of that, and more.

You can dip your toes in the water here.
Americans can get it here. 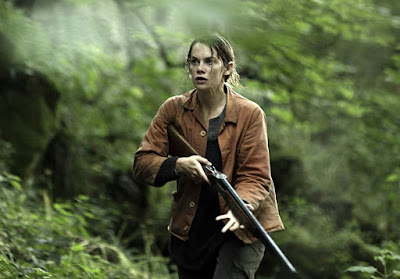