Crazy Rich Asians is a bright and fun romantic comedy, made into something that feels a bit different from so many others thanks to the cultural caricatures and lavish displays of wealth. Both of these things could put off anyone looking for reasons to be put off, but they work well in service of the actual focus of the movie, which is a very standard tale of love, family, and identity.

Constance Wu plays Rachel, a young woman who is about to accompany her boyfriend (Nick, played by Henry Golding) to a wedding that will allow her to finally meet his family. What she doesn't realise is that Nick is part of a ridiculously wealthy family. We're talking "let's just buy the island" kind of money. Hoping to make a good impression, Rachel soon realises that she doesn't have a fan in Nick's mother (Eleanor, played by Michelle Yeoh).

This could have been a much more unpleasant movie to watch if everyone had been snotty and quick to look down at those who don't have a gazillion pounds in their bank account, which is why the script from Peter Ciarelli and Adele Lim (adapting the novel by Kevin Kwan) is commendable for offering such an enjoyable array of characters. There are plenty who enjoy their wealth, some who prize it above everything else, and some who couldn't care less about it. Of course, it's easy to say you don't care less about wealth when you have it, which is why Rachel is the constant we root for in the busy series of gatherings, parties, shopping, and general socialising. Things are also helped along by a prologue that shows part of why this very rich family may have such an ingrained desire to keep hold of their position in society.

Wu and Golding are a solid central couple. The film focuses on the former, of course, but Golding isn't shown as a complete pushover. He's a nice guy who doesn't want his wealth to affect the woman he loves, and the film keeps him around long enough to remind viewers that he's exactly how he puts himself across. We never have doubts about Wu, or the integrity of her character, so making time for Golding is equally important here, underlining the fact that the main obstacle in this particular romantic adventure is the close family, the matriarch driven by self-preservation and a misplaced notion of what is best for her son. Yeoh is excellent in her role, easy to dislike while also easy to grudgingly admire. Everything she does is for her family, even if that doesn't mean things are going perfectly in the lives of her children. Gemma Chan is quite lovely as Astrid, Nick's sister and a shining example of how to act while representing the public face of the family (despite personal difficulties), and there are laughs to be had in most scenes that involve Awkwafina (playing Rachel's friend, Peik Lin Got) and Ken Jeong.

Director John M. Chu does a great job, crafting a layered film that provides plenty to think over while it also provides simple entertainment. The subgenre tropes may be hidden under a different coating but they're all there, nonetheless, and Chu makes sure to tick them off the checklist. He also takes the script and embellishes the dialogue with relevant mise-en-scènes, great work that peaks in a third act scene showing an important game of Mahjong between two central characters.

Everything is topped off by a soundtrack full of great cover tunes, plenty of moments that will have people daydreaming about what they would do if they ever had their own overstuffed bank accounts, and a standard rom-com finale that proves to be as satisfying as expected. 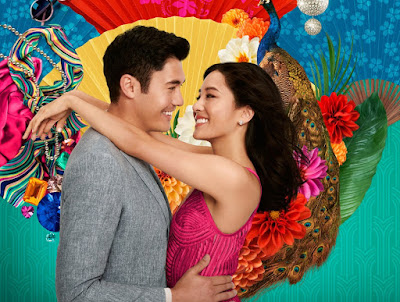