It had been a while since I enjoyed some simple Cynthia Rothrock entertainment, which is why I skimmed through the titles available on Amazon Prime and eventually settled on this, a film I had previously not seen (I've not actually seen many of her movies, despite being a fan of her martial arts skills).

Let's not beat about the bush here, this is a bad movie. It's actually quite terrible during many moments. It's also hugely entertaining, as are most of the movies that have Rothrock kicking ass in a leading role.

The plot is simple stuff. Rothrock plays Tracy Pride, an FBI agent after the dastardly Jason Slade (John Miller). Her sister, a news reporter named Joyce (Donna Jason), also has the same aim. This puts both woman, and the people close to them, in danger. But that won't be enough to stop them from trying to get their man.

Written by Herb Borkland, this is a cheesy, breezy, slice of '80s madness that just happens to have been released in 1993. If I didn't check details for these reviews then I would have sworn that this was 1988, at the very latest, but it's just one of those '90s movies that feels like a holdover from the previous decade. A lot of the dialogue is amusingly inane, especially when it's supposed to show chemistry between our female leads and men who admire them, but the best stuff is saved for the baddie, who even gets a moment in which to rant about how he can beat any man in a fight and make any woman he beds want to stay with him forever.

Director Godfrey Ho does what he usually does. Things are okay, and it all steps up a gear when you get the martial artists performing their martial arts. That doesn't always mean an actual fight though. The sisters playfully fight one another while arguing over who is going to drive a car. Joyce ends up sparring with someone, with chopsticks, as they enjoy a meal together. And then you get the proper fights. It's a shame that they're not as good as many other fight scenes I have seen in these types of movies, but there are just about enough of them, and both Rothrock and Chuck Jeffreys (as Jake Armstrong, a man who once protected the villain) help to liven things up when they can.

Is there any need to comment on the level of acting on display? Not really. If you've seen any other Rothrock film then you'll already know what to expect. She isn't the best, but she's also far from the worst, when it comes to onscreen fighters anyway. Nobody unbalances things by being much better. Jason is okay, if a bit bland, Jeffreys is quite charismatic, and Miller veers between wooden and completely bonkers, depending on what message his character is delivering in between his moments of oiled-up muscle displays.

There were so many other, better, movies that I could have given some of my time to this week, yet I am not unhappy with my choice. This was just under 90 minutes, it was very simple entertainment, and Rothrock kicked people in the head. Sometimes that's all I am looking for in my film choices. If you're ever in that frame of mind, check this one out.

You can get a DVD here.
Americans can get a Region 2 disc here. 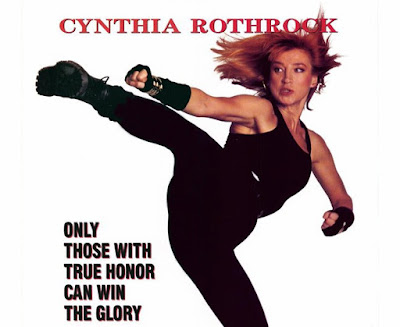