Since enjoying a number of the animated WB superhero movies, I have become familiar with the Teen Titans. I was not, however, familiar with Teen Titans Go, the more child-friendly version of the heroes. But there's not exactly a lot to figure out, as long as you are at least passingly acquainted with the DC superhero universe. You just need to get used to the unique style of animation on display here. And tolerate a few fart gags.

The plot is fairly simple. Our heroes don't seem to get the respect they think they deserve, an issue that becomes clearer to them all when they find themselves unable to get a movie made about them, despite every other superhero being given adventures on the big screen. Robin (voiced by Scott Menville) is the one taking it hardest of all, but that doesn't stop him from leading the team in a brave battle against the nefarious Slade Wilson AKA Deathstroke (Will Arnett), who has a cunning plan to steal a powerful crystal from S.T.A.R. Labs (Scientific and Technological Advanced Research Laboratories) and take over the world.

Having both worked on the TV show, directors Aaron Horvath and Peter Rida Michail are a safe pair of hands for this movie incarnation, assuming a certain familiarity with a lot of the main characters while also introducing the actual Teen Titans with a mixture of gags and fun song lyrics (yes, there are a couple of musical numbers here). Horvath gets extra credit, thanks to his fine work co-writing the script with Michael Jelenic, a script that often gets the biggest laughs from the idea that, yes, the market for superhero movies may be a bit oversaturated at the moment.

Although I am unfamiliar with many of the voice actors, they all do well in their roles (having played incarnations of the Teen Titans for over fifteen years now). I feel I should namecheck them here, at the very least. As well as Menville playing Robin, you get Greg Cipes as Beast Boy, Khary Payton as Cyborg, Tara Strong as Raven, and Hynden Walch as Starfire. The fun is helped along by the performances from Arnett (between this and his LEGO Batman work, he's arguably my favourite DC performer), Kristen Bell, Stan Lee (it's hard to pick his best cameo but this gets extra points for using him in a DC movie), Nicolas Cage, Michael Bolton (yes...Michael Bolton), and Greg Davies, as well as Jimmy Kimmel, John DiMaggio, Patton Oswalt, and a few others.

It's bright, it's lively, it's got a brisk runtime to ensure it doesn't outstay it's welcome, Teen Titans Go! To The Movies manages to be a fun superhero comedy that cares for many of the main characters while simultaneously skewering them with glee. This is fun for all age groups, as long as you don't mind some of the toilet humour, and I enjoyed it so much that I am hoping to check out the cartoon series it stems from. 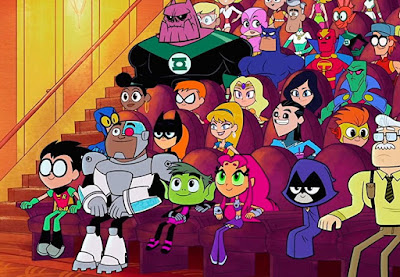