We've had a lot of great action movies in recent years, and a number of them have taken the time to at least hint at an unseen criminal world running parallel to our own. Hotel Artemis is another film along those lines. It's a blend of sci-fi, action, and standard thriller stuff. It's not great though. Unfortunately, it struggles to even be good.

Jodie Foster plays The Nurse, the woman in charge of the titular building. It's a safe haven for criminals, an exclusive medical facility that has some hard rules in place for the safety of everyone who comes and goes. If you're not up to date with your subscription payments then you can't get in. You can't bring in weapons. And you don't hassle the staff (Foster and her right hand man, Dave Bautista). Of course, these rules all start to be broken on a night when one man (Sterling K. Brown, in a lead role that feels very much like a supporting one) turns up, wounded brother in tow, after a botched robbery. There's a riot in the city causing problems, a couple of other residents (Sofia Boutella and Charlie Day) not getting along too well, a wounded cop (Jenny Slate) in need of assistance, and a surprise visit from the wounded owner of the establishment (Jeff Goldblum).

Hotel Artemis is so close to being a good film that it's almost frustrating to consider how much it misses the mark. The cast are all very good, and very good in their roles (even Charlie Day, who I like in comedic work but sometimes seems miscast when in more serious roles), the hints at the unrest going on in society are intriguing, but never developed into anything more worthwhile, and the few scenes that show the more badass characters actually being badass are fun (although Bautista is sorely underused, and when will Sofia Boutella be given the action movie lead role that she deserves?).

Writer-director Drew Pearce spends far too much time showing that this is his first feature, and that most of his written work used him best as part of a team of creative minds working towards the same goal. There's a damaging lack of focus, an unearned confidence in the dialogue scenes (Foster and Goldblum may be enjoyable to just listen to as they speak but they still need to be given more than the cheesy and clichéd dialogue that they're given here), and a general inability to give any of the main players material that is worthy of their talents. I also had an issue with the way we were given the rules of the hotel, only for them to be broken with far too little time or pressure applied to the decisions.

Take a bunch of lesser-known names and this movie becomes a straight-to-disc time waster. With this cast, however, there's really no way it can be viewed as anything other than a disappointment. The only person who comes close to being used well is Boutella, and even that feels too little too late, in an action sequence during the third act that puts her front and centre. 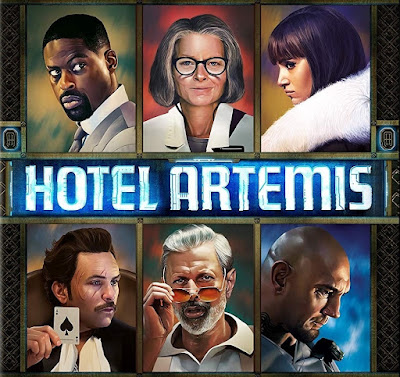