Splatter University is pretty awful, but it's awful in that amusing way that other slasher films from this era are, still managing to entertain me 100% more than some films that have more going for them (in terms of cast, budget, ambition, etc).

Things start off in a semi-traditional slasher manner (with the most traditional beginning being the trusted "prank gone wrong" scenario). A patient escapes from a hospital. The patient has dangerous mental health issues, which may just get worse after he kills a staff member and steals the uniform. Some time later, a teacher is killed. Some time after that . . . the university that was the site of the murder is welcoming a new teacher (Julie, played by Forbes Riley, billed as Francine Forbes). The murder still resonates with many of those attending the college, but not enough for everyone to be more careful and avoid setting themselves up as potential victims during the predictable killing spree that's about to get underway.

Directed by Richard W. Haines, who also wrote the screenplay with a few other people, although how the hell it took more than one person to knock out this nonsense is beyond me, Splatter University is lazy and unimaginative from start to finish. There are no standout kills, there's no wonderfully twisted backstory to be developed on the way to the grand finale, and almost all of the characters are completely interchangeable.

Riley does okay as the new teacher who soon finds that the university may not be as safe as it should be, Ric Randig is also okay as Mark, the bland main male character, but both of them are outshone by the enjoyable performance from Dick Biel as Father Janson, a man who seems to want everyone to shrug off the murders and get on with their daily duties.

If you want to see a killer in a cool or freaky mask then look elsewhere. If you want loads of violence and gratuitous nudity then look elsewhere. If you want something that is willing to take any risks at all then, well, this has one or two tricks up its sleeve to make it just about worth your time. Unfortunately, many viewers may have given up before those tricks appear, because the rest of the film plods along as if it was The Turin Horse.

Say what you like about it, it does enough to pass by the fairly brief runtime without getting too painful. And I somehow managed to link it to The Turin Horse. So not a total waste.

3/10 (yes, it still ends up with the same rating as The Nun, despite me finding a bit more to enjoy in it).

You can buy your prime cheese here.
Americans can get the same disc here.
Or just click on links and buy anything, I then get pennies. It's a win win. 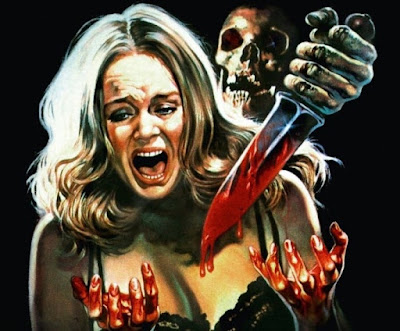