If you haven't yet checked out the films of Buster Keaton then you really should rectify that as soon as possible. He remains a giant figure in the field of cinema, technically innovative, insanely delighted to throw himself across various scenes of peril, and still very funny. He was also massively influential, of course (just watch any Jackie Chan film for some of the most obvious homages). A lot of people will tell you that Steamboat Bill, Jr. is one of his films that you should prioritise. At the risk of having tinned tomatoes thrown at me, I would not be one of those people.

Don't get me wrong, Steamboat Bill, Jr. is a very good comedy. It's just not up there with some of his marvellous shorts, and it's also a step behind The General and Sherlock Jr. (still his best film, as far as I'm concerned).

The story is as slight as you'd expect. A man is waiting for his son to return from college, assuming he has grown from boy to man and will help him with the work of operating his paddle steamer. The son arrives, in the shape of Buster Keaton, and it's immediately apparent that he's not a natural fit for the role. But he will try. He will also fall in love with the daughter of a rival businessman, he will try to break his father out of jail (due to him assaulting the aforementioned rival), and he will wander around in the midst of a destructive cyclone.

Directed by Charles Reisner, Steamboat Bill, Jr. is arguably most famous for two things. First of all, this is the film in which the house falls on Keaton, his life saved by the placing of a window. Second, it was the last movie that Keaton made with this blend of team players and creative control, just before he moved to MGM.

Like so many of these movies, you can divide this into three main acts. Act one is the arrival of Keaton and his attempts to fit in with the role that his father wants him to take on. Act two shows the state of the paddle steamer and has his father jailed, leading to an attempt by Keaton to break him out. And act three is the cyclone. All three of these acts have wonderful moments, and some good laughs, scattered throughout, but none of them have quite enough in the set-pieces to make them as good as they could be. There's no consistency to them, unlike the extended sequences in other Keaton movies.

Keaton is as brilliant as ever in the main role, I still can't think of anyone in cinema to this day who maintains the deadpan expression better than "Old Stone Face". Ernest Torrence is amusingly exasperated as his father, Tom McGuire is the villain of the piece, and Marion Byron is a pretty love interest.

The script may be credited to Carl Harbaugh but it would seem that Keaton actually put the thing together. Maybe that is why this doesn't feel quite as great as some of his other works. I know that Keaton seemed to have his hand in every department, and it was surely his inventiveness and creativity that gave us so many iconic moments, but this film feels like it could have benefited from some more gag writers coming up with more little moments to connect up in between the bigger highlights.

But what do I know? Who am I to criticise the work of a fully-fledged comedic genius like Keaton? Watch the film for yourself, and then you can enjoy it, AND enjoy telling me how wrong I am.

I recommend this set, if it's available anywhere.
Americans can get this beauty. 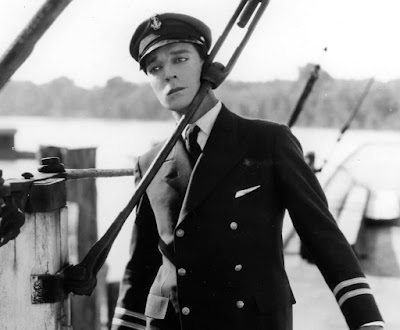