It’s very difficult for me to sit here and write a thorough review of The Nun. Not because I can’t find the right words for it. Not because my memory has failed me. Just because it’s pretty crap. Yes, The Nun is depressingly bad, not just because it’s a poor movie, but also because it’s probably still going to prove popular enough with mainstream audiences to lead to more movies just like it (this film itself coming along as a tangent from The Conjuring 2, of course).

Taissa Farmiga is Sister Irene, a young nun (trainee, so . . . trying to develop a habit?) who ends up taken along to a Romanian monastery by Father Burke (Demián Bichir). The monastery has become home to a supernatural force, one that has led to confusion, fear, and death, and it is up to Father Burke and Sister Irene to get to the bottom of things. There’s also a potentially helpful local lad, “Frenchie” (Jonas Bloquet), as well as a fleeting appearance by the Warrens (played, as ever, by Vera Farmiga and Patrick Wilson) to remind viewers of where this story came from.

If I could do a word-filled review that could essentially represent that meme of Robert Downey Jr making that exasperated face (you know the one, you know) then, trust me, I would. It's all it deserves, which is a real shame when you consider everyone involved.

First of all, Farmiga and Bichir aren't terrible in their lead roles, they just happen to be stuck in the middle of a terrible film. Bloquet may not be quite as good, but he does well enough, and Bonnie Aarons makes quite an impression once again, for it is she who portrays the evil nun.

Writer Gary Dauberman (who seems to be the go-to guy that James Wan likes to work with while establishing The Conjuring spin-offs) has a decent filmography. He gave us Annabelle and Annabelle: Creation, as well as having a hand in bringing It to the big screen. Perhaps he needs a group of people to be working with, for best results, or perhaps on this occasion he was too hampered by the path that Wan wanted this origin tale to travel along.

Corin Hardy directs, and does so without any sign of the imagination and heart he showed in his superb feature debut, The Hallow. There are some weak jump scares, a selection of dull CGI moments, and nothing to distract from the fact that most viewers, if familiar with The Conjuring 2 will at least have some idea of how things are going to end.

There's not any real reason why I should hate this as much as I do, but it's not often that I have such low expectations for any film and have none of them met. This doesn't even do the bare minimum I look for in a mainstream horror movie. Which shows how far removed I can sometimes be from the average cinema patron, with this currently being the biggest box office success of the CMU* so far.

The Nun can be bought here.
Americans can get it here. 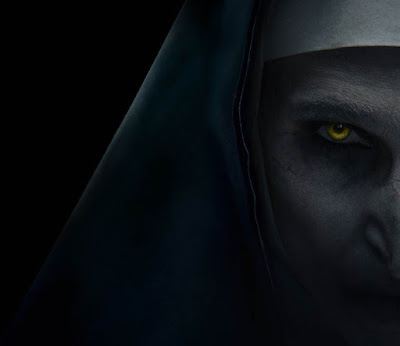