Although Hammer are well known, and celebrated, for their crimson-filled reworking of the archetypal icons of the horror genre, they had quite a bit of variety in their output. There were the TV shows being moved to the big screen (but a lot less people are in a rush to revisit the likes of On The Buses), epic fantasy films made on less-than-epic budgets, and wonderfully strange attempts to deliver interesting psychological horrors (the disappointing Demons Of The Mind and enjoyably bizarre Straight On Till Morning being the most memorable examples). And there were the thrillers, which I believe actually outnumber their horror movies when you add every film up that made the total output from the studio (the classic incarnation anyway, as it were).

Which brings us to The Snorkel, a thriller from the studio that I had previously never heard of, and one that will hopefully be (re)discovered by film fans nowadays, and given some of the love that it deserves. Not only is this an enjoyable thriller, it's beautifully simplistic in the cleverness of the central conceit, providing a killer with a modus operandi so fiendish that it allows him to be more brazen and arrogant than most killers while authorities understandably never put two and two together.

Peter van Eyck is Paul Decker, and we first see him turning on a lot of gas pipes and then hiding under some floorboards, all the while wearing a snorkel. This leads to the death of his wife, who was the mother to young Candy (Mandy Miller). Candy is convinced that her stepfather is responsible, despite him being out of the country at the time (he also manages to get his passport stamped, which provides him with quite a solid alibi), because she has always insisted that he already killed her father years ago. As the film unfolds, Candy determines to prove how it was possible that her mother's apparent suicide was actually the work of a murderer. Meanwhile, she also has to keep herself safe from Paul.

Based on a story by Anthony Dawson, The Snorkel rattles along at a fair pace, thanks to the solid direction from Guy Green and a wonderful script from Peter Myers and Jimmy Sangster. Unlike some of their other thrillers, this has no ambiguity, no attempt to cover the central mystery with a cloak of potential supernatural spookiness. Viewers see the killer at work, we're on the side of Candy from the very beginning, despite nobody else believing her. This is what makes the film work so well, seeing the two leads interact and push one another in their conversations.

Van Eyck is very good in his role, able to charm others around him while always ready to glower at the young lady who knows his secret, and Miller is very capable in the role of the plucky girl who starts to piece together a very strange picture. Although essentially a two-hander, certainly in the best moments, there are enjoyable supporting turns from Betta St. John (a woman who helps to care for Candy) and Grégoire Aslan (the Inspector who needs some proof before he can investigate the death as a crime).

If you think you're familiar with most of the output from Hammer then may I recommend you start diving deeper, and The Snorkel is as good a place to start as any, ironically enough.

The Snorkel is part of this superb set (which is region free). 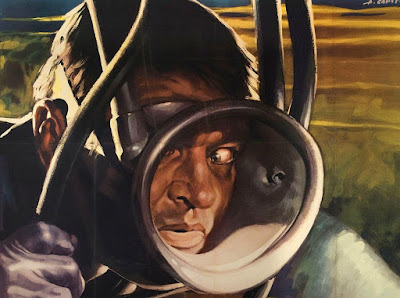