I was not looking forward to Death Wish, the remake of the 1974 Michael Winner film, for a number of reasons. Despite me enjoying a number of his films, I didn’t think director Eli Roth would be a good fit for the material, Bruce Willis in any leading role nowadays gives me concern, and there were trailers that didn’t look promising. The one small shred of hope I had was that they’d kept enough of the ideas contained in the original script, by Joe Carnahan, to make this more interesting and relevant for a new generation.

Willis plays Paul Kersey, a surgeon who we first see losing his battle to save the life of a shot police officer before heading off to try and save the life of the man who shot him. That’s what he does. He saves lives. When not saving lives, he spends time with his family (his wife, Elizabeth Shue, and daughter, Camila Morrone, and also his brother, Vincent D’Onofrio) and seems to have everything in place for a content time. That all changes when a robbery leaves his wife dead and his daughter in a coma. Frustrated by the fact that it looks as if the police won’t make much progress, Kersey becomes a deadly vigilante, unsure of his own capability at first but quickly becoming more confident in his role.

There are a number of plus points here. Making Kersey a surgeon, rather than the architect he was in the original movie, is a good move. It further illustrates the transition from peaceful family man to gun-toting “grim reaper”, and it allows him to do more to cover his own tracks (he picks up clothing that is due to be disposed of by the hospital, he can treat some of his own wounds). There are also a couple of good points made about modern attitudes and accessibility to dangerous weaponry and information. These points may be hidden away beneath the sheen and the montage moments that throw AC/DC alongside the visuals, but they’re still there nonetheless, adding at least a modicum on intelligence and commentary that didn't have to be included.

Willis is slightly less comatose than he has been in so many other roles in the past decade, but he’s still the weakest link of the main cast. One moment that has him trying to convey the pain at what the criminals did to his loved ones is almost laughably bad, but he's better when growing more at ease with the death-dealing vengeance. D’Onofrio is as good as he always is, Shue and Morrone do well in their supporting roles, and Dean Norris puts in yet another great turn as the main investigating officer, a man who seems to be earnest in wanting to help and also starts to put two and two together as the criminal bodies start to pile up.

Roth does well in the director's chair. Everything moves along quickly, and predictably, enough and there are a few impressive moments of grue that serve as a reminder of who is at the helm. He makes some mis-steps, as he is won't to do in most of his movies, but makes a better fist of things than many other directors I could have considered for the job.

It's not as good as the original, which is expected, but this ends up being a perfectly serviceable reworking of the material for those who want to give it 100 minutes of their time (or thereabouts).

You can buy the movie here.
Americans can buy it here.
Or you can feel free to use those links to shop for anything else that catches your eye. 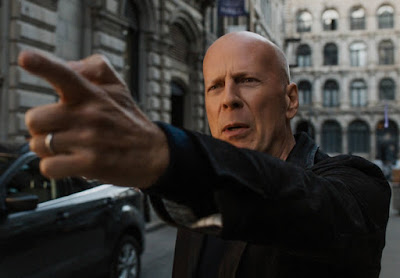