Here's the thing. I knew when this movie started that it wasn't the latest movie called Escape Room. But I only just realised it. An amusingly cheeky little move from Netflix, this popped up and I immediately thought that the latest movie was one of their products, somehow getting a cinema release while also dropping on their service. Then I saw who was involved. And then I started to check out the headlines of some of the reviews for it. This was definitely not the same film that is now in cinemas in America, and it's not been that reviewed all that favourably.

The latter is quite odd, because there's nothing here that really makes this stand out as awful. In fact, I quite enjoyed it, and would expect others who enjoy horror movies with an element of puzzle-solving to at least be reasonably entertained.

The plot is simple. For his birthday, Tyler (Evan Williams) is given an Escape Room experience. He and his friends are taken to the location by limo, phones and all other items are taken off them, they have hoods put over their heads, and when they can next look around they are in different rooms with puzzles that need answering to provide an exit. Tyler is in a room all on his own, one couple is in another room, and one couple is in yet another room. And Tyler's girlfriend seems to be imprisoned somewhere. The time limit is an hour. Can the friends work together to get out? And how will they react when they realise that the rooms are actually rigged with very deadly, very real, boobytraps?

Written by Noah Dorsey, who worked on the idea with director Will Wernick, the biggest problem with Escape Room is the generic cast. Even that's not a huge minus. They're not awful, and the script does eventually start to differentiate individuals from the homogenous mass that they make up, but they're just not that interesting or memorable enough to make as good an impression as they should have been able to. Williams, for example, is given a scene early on that shows his character being quite the whizz with numbers. That's all fine and dandy, and his intelligence is also shown in a number of other sequences, but the plot constantly requires him to be helped by others, without any other real nods to their individual strengths or skills until the very moment it is required (see a scene involving the riddle of the Sphinx for the prime example).

Wernick doesn't do a terrible job with the direction, although he keeps everything a bit tamer than some horror fans may want. The deaths don't come thick and fast, but they're enjoyable when they finally start to happen, even if some are the result of ridiculously slow reactions from the main characters (again . . . that damn Sphinx riddle scene). Between the direction and the script, the main thing is that the puzzles don't seem impossible. They all play out in a way that provides a nice balance between tension and fun, at least until the risks start to increase as people get closer to the exit (of course).

I've not seen the most recent film that shares this title, so I can't say how this one compares, but I can say that this is a slick horror movie that does enough to entertain for most of the runtime. The opening act is a bit wobbly, but things pick up immensely once everyone is placed in the puzzle-filled environments. And that's what I hoped would happen. 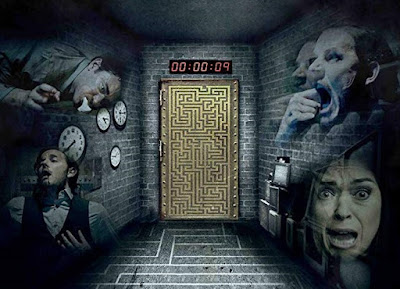