It's fitting that those with the ability to see the world around them would have to have been blindfolded for the past few weeks to have somehow missed the promotion and memes that have been doing the rounds since Bird Box was released on Netflix. It all helped to turn the film into another big hit for the company (although exact numbers are always hard to come by when figuring out how good or bad things do on the platform).

Sandra Bullock is Malorie, a woman who was extremely happy at one point, just before the whole world went to hell. Malorie had been attending a standard check up on the health of her baby, accompanied by her sister (Jessica, played by Sarah Paulson), and then people started to act funny as they headed home. It's a strange force, something that people see that drives them to commit suicide. Malorie ends up in a house with some others (including Tom, played by Trevante Rhodes, and Douglas, played by John Malkovich) who have quickly surmised that the key to staying alive is to stop yourself from being able to see the outside world. But that makes things difficult when provisions need collected, and when there are some other people who are insane enough to want to help others look at what they somehow view as something glorious.

I approached Bird Box with no small amount of trepidation. Let's face it, I was already a week or two behind everyone else, a lot of people seemed to be having more fun with the memes than the actual movie itself, and I assumed that it was another case of Netflix doing a better job of creating viral content than a film that would actually impress me. I'm pleased to say that I was wrong.

This is a fantastic film. Not just a fantastic film to land on a home platform, although that undoubtedly helped it to snowball and find the kind of audience figures it may well have struggled to reel into cinemas, but a fantastic film for genre fans. Many have already labelled it as a cross between The Happening and A Quiet Place. While that comparison isn't entirely unwarranted, it's not exactly fare. Bird Box ends up being better than both of those films (which I know is an opinion that will leave me pretty lonely, in the case of the latter movie anyway, but I'm standing by it).

Based on a novel by Josh Malerman, the screenplay by Eric Heisserer is very good indeed, using jumps between the present and the past to help maintain tension and optimise the pacing. The fact that the central force is unseen (but physicality is certainly hinted at - people focus their sight somewhere, shadows are cast across windows, etc) helps to avoid any anticlimactic reveals, and there's also the variety added by the other survivors who become a problem, as happens in almost every "post-apocalyptic" movie, a subgenre that this film certainly has a foot in.

Director Susanne Bier has a solid enough filmography, although nothing that seems to be as horror-tinged as this is. But that may be another factor that really helps, Bier helps to keep everything consistent in tone by allowing the characters to lead the way, simply allowing the situation to allow them to show more of themselves as they have to act and react quickly, to preserve their own lives and anyone else they decide to try and protect.

Bullock is excellent in the lead role, but that's not much of a surprise to anyone who has been a fan of her work over the years (and I count myself among them), but I doubt the film would have worked as well if they'd placed it all on her shoulders, a la Gravity. No, this time around, a strong lead performance is boosted by strong supporting turns from a cast that includes Trevante Rhodes (who is very good), John Malkovich (as excellent as ever), Jacki Weaver (underused), Danielle Macdonald (saddled with being the character who makes the decisions that will make you roll your eyes), and Tom Hollander (very good in a role that is perhaps the weakest link in the whole film). There are also good performances from Paulson, B D Wong, Rosa Salazar, Lil Rel Howery, Pruitt Taylor Vince, Parminder Nagra, and young Vivien Lyra Blair and Julian Edwards as the young children accompanying Bullock for part of her journey.

Because of the sheer number of people who rushed to see this, Bird Box has very quickly proven to be a divisive film. And I already know a lot of people who don't want to watch it because they're already fed up of the gags that have gone viral. I would say, as with most movies, it's still well worth your time. See it and make up your own mind about the film itself. Not the marketing, not the reaction to it, just the film. And I hope you end up enjoying it almost as much as I did.

Here's a pack of other Sandra Bullock movies available to buy.
Americans can get a Bullock fix here. 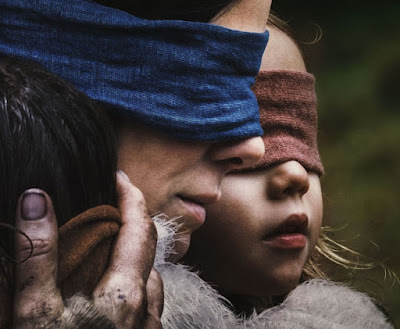