There's a moment in Road Games, a thriller from writer-director Abner Pastoll, in which everything that could have been tense and plausible is brought crashing down. It's a moment that has characters obstinately not blurting out information that could change everything, but the script obviously cannot allow that to happen, so it doesn't. And that's a great shame, because Road Games has a decent run up until then.

The premise is simple. Jack (Andrew Simpson) is hitch-hiking in France, trying to get to Calais, which is his route back home to England. He meets Veronique (Joséphine de La Baume), the two decide to continue on together, and eventually they are picked up by Grizard (Frédéric Pierrot) and taken to his home (where his wife, Barbara Crampton, also resides). Things become a bit tense and strange, and we shouldn't forget the fact that a killer has been roaming the countryside.

This is only the second feature from Pastoll, who has also helmed a fair number of shorts, and it's clear that he has a level of competency undermined by what seems to be either a slight lack of imagination or an unwarranted confidence in his main story beats (many of which are either far too familiar to fans of thriller movies, slightly fumbled in the execution, or often both). Seeing one or two twists coming isn't always a mark against a movie, but it is when plotting starts to feel as if things have been twisted and manipulated ONLY to create a third act that doesn't offer anything more than those twists.

The varying quality of the acting doesn't help. Most of the cast do okay (Pierrot and Crampton do well, despite being hampered by the required level of oddness given to their characters) but De La Baume and Simpson let the side down, with the latter particularly weak in some scenes that need an actor capable of conveying a good mix of fear, bewilderment, and determination. I haven't seen him in anything else, that I can think of, and I wouldn't rush to watch any other movies that have him in a lead role. Féodor Atkine is the only other main actor, and he does just fine.

As ever, I have tried to write this review without spoiling anything. It's disappointing that the same care wasn't taken by Pastoll. Road Games has enough to make it an okay watch, but that's an opinion that comes from me, a notoriously kind and forgiving film fan (most days). Others may find it all a bit too tedious, and perhaps slightly drawn out. Even at a runtime of just 95 minutes, some sharper editing could have improved things.

This is a road that we've all been down before, and this journey doesn't lead to anywhere all that exciting.

You can buy the movie here.
Americans can buy it here.
Or you can click on either of those links and then buy whatever you like, that still works for me. 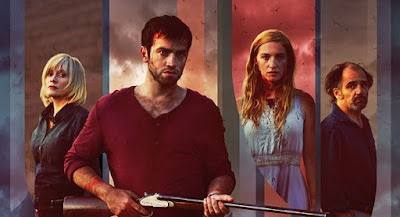