A group of teens living in a care home facility suddenly find themselves unsupervised, which leads to them immediately having an evening of drink, drugs, and ransacking the office areas. But once they have gotten their kicks, they realise they should look a bit further afield, and that's when they find that some kind of virus has turned all adults into dangerous psychopaths. They need to stick together to survive, and hopefully reach somewhere safe.

Don't Grow Up is an odd one. It's not a bad film, technically, and yet it never really turns into a good one. Considering how well the same idea was used in the more recent Mom & Dad, I was looking forward to this. Unfortunately, it soon becomes obvious that a film from the viewpoint of the kids is a lot less interesting than a film from the viewpoint of the adults. There's no added strand of intrigue, or black comedy, here and the moments that have the kids facing off against violent attackers could have been snatched from a multitude of zombie or virus films.

Director Thierry Poiraud shows a fair degree of competence without ever showing any flair. This is not a visually-impressive or inventive film, which is a failing of both the direction and the script (by Marie Garel Weiss). It is far from impossible to make a film featuring central characters that viewers don't love but it needs to be done with more effort than seems to have been made here.

The young cast all do okay, with Fergus Riordan and Madeleine Kelly given the most screentime. It's a shame that Natifa Mai wasn't given more to work with, as she's the best of the bunch, with other main roles going to McKell David, Darren Evans, and Diego Méndez. Nobody makes a strong enough impression, beyond Mai, which isn't entirely their fault, it's a sign of the weak script that they're forced to work with.

Perhaps it was a deliberate irony to make a thriller/horror movie about kids being threatened by random adults in a way that left the child actors being hung out to dry by the adults in charge of things, but I doubt it. The simple fact is that this comes close to being a decent little watch, at times, and consistently fails to step up to the next level. There are a couple of moments that would make for decent set-pieces in other films. But they're squandered opportunities here, lacking both the tension and the heart to make them more than just another moment to get out of the way en route to the end credits.

I don't know what I was expecting when I pressed play on this movie, I just know that it didn't deliver anything really satisfying. The horror element doesn't work, because it doesn't do enough with the concept to differentiate from a hundred other movies, and nor does the heart. It could have tried to comment on something, anything, but doesn't seem to do that either. Instead we get something too vague and unengaging to rise above the level of mediocre.

You can buy an imported disc here.
Americans can buy it here. 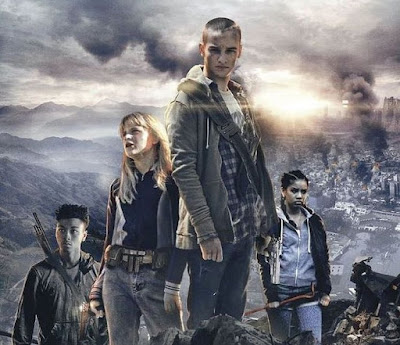