Vanessa Hudgens is Lady Margaret, a soon-to-be-wed royal figure who is marrying her partner because it is her duty, not because she is in love with him. But she really wants to spend a couple of days before her wedding just getting to look around and spend time with the everyday people of Belgravia. Vanessa Hudgens is also Stacy De Novo, a top baker who is due to participate in a baking competition that takes place in Belgravia. When Lady Margaret sees Stacy, the two literally bump into one another, she thinks it will be a great idea if they swap places for a couple of days. Her fiancé, Prince Edward (Sam Palladio) is due to be away on business anyway, so that makes things easier. Stacy just needs to learn a bit about how to behave, and put on a posh accent, while Lady Margaret needs to loosen up a bit and also change her accent.

Considering the previous two TV movies from director Mike Rohl were Miss Christmas and Royal Matchmaker, this would seem like an obvious fit for him, mixing the royal romance with the holiday trimmings (and I've been surprised in recent years to find just how many Christmas films make use of a royal romance plot - who knew there were so many small provinces with princes desperate to get married?). And he seems to have put himself in safe hands with writer Robin Benheim, who has an extensive list of credits already, and who co-wrote this with Megan Metzger. Not that this is a quotable classic or anything, movies of this kind rarely are, but you have all of the usual lessons learned, a couple of twists and turns, and the necessary amount of festive cheer.

I can't say that this film does anything truly amazing, it's a rare holiday film indeed that rises up to that level, but I'm not going to write this review without heaping a serious amount of praise upon the main performances from Hudgens. Easy to dismiss because of the film that she's starring in, Hudgens gives an absolutely fantastic selection of skilled turns, either portraying Stacy or Lady Margaret, or even Lady Margaret pretending to be Stacy, OR Stacy pretending to be Lady Margaret (which make up the majority of her scenes). It's a shame that few people will give her credit for this, because it's JUST a Christmas movie (and, basically, a TV movie made by Netflix), but her performance is consistently pretty flawless. Seriously. She lifts up the whole film by being utterly convincing with anything that she's trying onscreen.

As for the rest of the cast, Palladio is Princely enough as the Prince, Sara Stewart and Pavel Douglas are okay as his surprisingly understanding parents, Nick Sagar and Alexa Adeosun are both likeable enough as Stacy's friend/sous chef Kevin and his young daughter Olivia, respectively, and Suanne Braun and Mark Fleischmann are the main staff members helping the royal couple, with Braun trying to help things go smoothly and Fleischmann trying to figure out why something suddenly seems different about Lady Margaret. 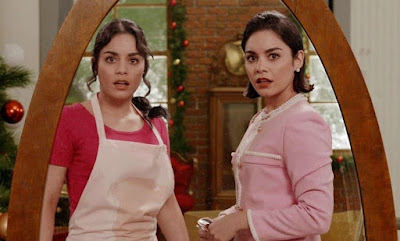