Not to be confused with the American comedy of the same name, Tag is a Sion Sono movie that is as typically mad as a Sion Sono movie can be. It has at least one very interesting idea at the heart of it all, and the wild set-pieces hold your interest, but this is a film that I fractured viewing experience that I can easily see people disliking, despite the fact that I really enjoyed it.

Things start with a clip that many people will already have seen, even if they're unaware of the fact that it's from this movie. Mitsuko (Reina Triendl) is just one of many schoolgirls sitting in a coach as it travels along a road. The atmosphere is calm and dreamy. Mitsuko bends down to pick up her dropped writing implement, and that is when an invisible force cuts the entire bus in half, having just done the same to the bus just ahead. There's metal and bisected bodies everywhere, and Mitsuko is understandably shocked as she tries to figure out what happened. While escaping the carnage, the force seems to follow her, taking out other people while Mitsuko does her best to avoid it. She then gets to her school, where more strangeness occurs. She is then a bride (and has the name Keiko, and is played by Mariko Shinoda). More strangeness occurs. She is then a runner in a marathon (Izumi, played by Erina Mano). Something dangerous seems to be pursuing every one of her identities, even as she tries to figure out what is going on and just who she really is.

Based on a short story by Yûsuke Yamada, Sion Sono wrote and directed this with his usual mix of slick visuals and unflinching approach to more extreme moments. The gore is infrequent, but it's a huge bloody mess when you see it (and you do get to see it), the madness stops completely when characters get together to discuss some of the ideas being proposed as explanations for the strange events, and there's a transition between each main segment that allows viewers to clearly see the lead changing identities. The whole film does a great job of mixing the perplexing, the disorentating, and the more grounded moments. It may be a head-scratching viewing experience, at times, but that's only keeping viewers close alongside Mitsuko/Keiko/Izumi as she tries to figure everything out.

Triendl does well in her role, as do both Shinoda and Mano, but it's worth singling out Yuki Sakurai for some special praise. She plays Aki, a girl who is always there as a friend to the main character. But sometimes Aki seems oblivious to what is about to unfold, and sometimes she seems to know a lot more than our lead. Whatever her sense of the situation, Sakurai plays her perfectly throughout every main sequence.

Although it feels very much like a throwaway film, any attempt to add some logic comes along too late and I'm still not sure it really makes any sense, I still had a blast with Tag. It ultimately didn't matter to me how things ended anyway, as I was enjoying thinking about the various possible explanations that might have been used. I recommend this, even though many may view it as a lesser Sono flick. 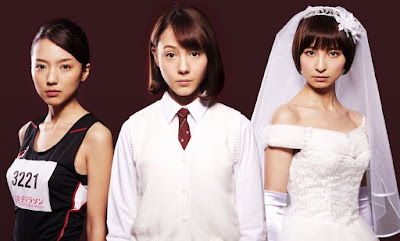