The first in a series of nine films (although I don't know how strong the connections are between each instalment), Brutal Tales Of Chivalry is a familiar tale given some extra power from the time and setting.

Set after WWII in a small seaside town, Seiji Terajima (played by Ken Takakura) is the soldier who returns home to find that things have taken a turn for the worse in his absence. Seiji is also an ex-yakuza, a highly-regarded individual who has to take up position as head of the gang when the previous boss is fatally wounded in an attack by rivals. There's also the fortuitous arrival in town of a man named Kazama (Ryô Ikebe), a stranger who becomes a bit of a friend to Seiji, and perhaps when he most needs one.

Directed by the fairly prolific Kiyoshi Saeki, Brutal Tales Of Chivalry is a solid, if unspectacular, tale of responsibility and honour. Those hoping for some action-packed violent spectacle will be sorely disappointed, despite a finale that rewards viewers for their patience, but that doesn't mean that there isn't a lot to enjoy, particularly in the ways in which various characters interconnect and behave with one another.

The script, by Isao Matsumoto, Akira Murao, and Hideaki Yamamoto (each one of them with an extensive filmography worthy of exploration), strikes a nice balance between the yakuza politics, the dealings of the various businesses on the island, and the ways in which Seiji has to readjust to normality after his time in military service. It also feels as if there's certainly more going on just underneath the surface, with commentary on the war and the work done to rebuild Japan after it. I don't know enough about the context to add anything more definite, but I certainly suspect that there's more to appreciate here for those who have more than my passing familiarity with Japanese history.

What is more obvious, however, is the magnetic star turn from Takakura. It is obvious from his first moments onscreen that he is a great choice to play the central character, as believably tough and stoic throughout as he is. Ikebe is a nice foil, very much cut from the same cloth but able to look around and observe the proceedings as an outsider, and there are also good supporting turns from Yoshiko Mita (as Aya, a woman who was once in a relationship with Seiji) and one or two others, although nobody comes close to stealing the film away from Takakura and Ikebe.

Although not as dense and complex as some other Japanese yakuza/crime movies I could mention, Brutal Tales Of Chivalry makes some effective points by spacing them throughout a plot that shows the profits of crime stemming from the misfortune and misery of ordinary people trying to do their best to work together and return to a status quo that was upended by war. 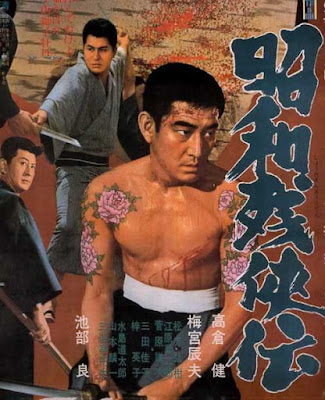