Japanuary: Grave Of The Fireflies (1988)

Arguably one of the most emotionally devastating animated movies of all time, Grave Of The Fireflies is the tale of a young boy (Seita) and his little sister (Setsuko) trying to survive during wartime in Japan. Their mother has been killed in a bombing raid, leaving them seeking shelter with a selfish and opportunistic aunt, and then moving on from there as they try to fend for themselves in an environment where everyone is too busy doing the exact same thing to spend more time trying to help vulnerable children.

Based on the short story by Akiyuki Nosaka, and adapted for the screen by director Isao Takahata, there's nothing in this movie that isn't grounded in the harsh realities of life during wartime when your home is the target of major attacks. Watching it is a stark reminder that few films really explore this side of war, with many preferring to throw us into the horrors of being on the field of battle (a double-edged sword that can both damn and inadvertently glorify the visceral experience of being a soldier in the thick of the action). It's understandable, those thrown into the fighting on the frontline are making one hell of a sacrifice, but looking at those left behind, especially those trying to survive as they live in the shadow of bombers, is an equally relevant way to show the repercussions of war, and how it impacts upon so many innocent lives.

Takahata doesn't make one wrong decision here, unless you want to criticise him for making everyone weep copiously as things play out. The animation is gorgeous, the script is grounded in a reality that could have been avoided by allowing the children to indulge in a few flights of fancy, and it's only the fact that it's not a live-action depiction of the events that makes it a bit more bearable (although there have been two different live-action interpretations, one in 2005 and one in 2008 - I haven't brought myself to give them a watch yet). What could have been a sweet and poignant film with all of the sharp edges rounded off is, thankfully, a sweet and poignant film with the conviction to simply show you the real horrors that two young children end up enduring and have faith that you will keep watching because you care about the characters enough.

Tsutomo Tatsumi and Ayano Shiraishi are both excellent as the two main characters, with the latter particularly moving as the weaker and younger child. Akemi Yamaguchi doesn't have many lines of dialogue, but she delivers them well enough, and they effectively illustrate her to be a bad person, either someone who has always been sharp and selfish or someone warped into that form by the war.

If there's one slight mis-step here, it's the decision to effectively start things off at the end. Mind you, that allows viewers to steel themselves against what is about to play out. This is no fairytale, war doesn't often have a happy ending for those directly in the line of fire, and Takahata ensures that you are ready to accept that, even if you don't really want to.

Beautiful, sweet, devastating, it's not one you'll want to revisit, but it's one that demands you eventually DO, whether you're reminding yourself of the power of it or introducing the film to those who have yet to cry their way through it.

Make yourself weep by buying the movie here.
Americans can be sad with this purchase here. 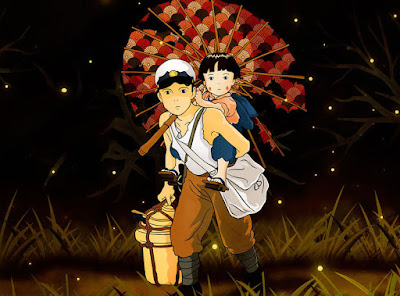