Fûka Koshiba plays Minami, a pleasant young woman who struggles to settle into her student role at a research institute focusing on studying and improving the survival rate of farmed tuna, hence the title. Minami is viewed favourably by her Professor (Hidetoshi Hoshida), but less favourably by a young man, Sudo (Tom Fujita), who doesn't think she is serious about doing her bit to help the institute.

Part rom-com, part drama about facing up to your responsibilities, and part informative presentation about tuna, and the ways in which it is farmed and looked after, Tuna Girl is about as light and disposable as they come, but has a certain unassuming charm to it that makes me glad I decided to give it a watch on Netflix. I may be the only one who does so, I can't see it ever being at the top of anyone's list, and I won't ever revisit it, but I don't feel that I wasted my time. I know, that's a hell of a ringing endorsement, right? "I watched this and didn't feel that I wasted my time" - Kevin "7/10" Matthews.

There's not much information available about this online, I'm not even sure of who wrote the screenplay. Mana Yasuda is the director, and he approaches the material with a basic, almost after-school special, approach to things. For all I know, this IS an after-school special. It has that feeling of lessons being learned, friction between individuals without anyone being singled out as one main baddie, and you get all of that bonus tuna info throughout. There's also a good point made about social media, how it can alter your image, how best to react to any major blow from something that feels very embarrassing, and how to stand up for yourself when it becomes clear that people are pretending to take an interest in you for the sake of their own agenda.

Koshiba is a lovely lead, she's all smiles and lightness for the most part, a demeanour that belies her commitment to the decisions she has made. Not that she is fully committed from the very beginning. Her acting unsure, and squeamish, during the opening third of the movie is the starting point of her journey, one that she begins with enthusiasm and naiveté, before being shown, slowly but surely, what she really needs to be doing, and why it is important and worthwhile. There are a few other supporting players, and they're fine, but the others that remain most important throughout are Hoshida as exactly the kind of Professor you would want, someone patient and able to remember that everyone starts their path through academia from different points, and Fujita, who does the moody and serious thing for most of the film, watching the development of our lead as she moves, slowly but surely, to the confident young woman who can be assured of doing her best by the institute.

Destined to be forgotten within a few weeks, at most, Tuna Girl at least gets a couple of bonus points for doing something a bit different. It's sweet, moderately amusing, and will probably be viewed by about a dozen people, at most. 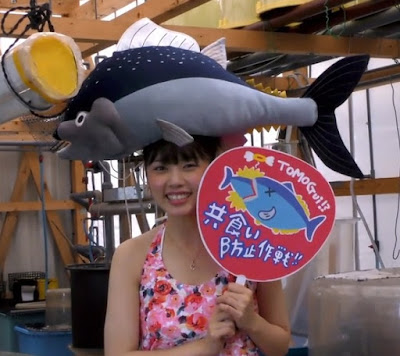