First off, yes, this is based on a manga (by Tite Kubo). I know that won't surprise anyone, but I figured I should mention it now in case I forget while heaping praise upon the film. Because I really liked this.

Ichigo Kurosaki is a teenager with a special gift. He can see ghosts. But one of those ghosts is a bit more than just a ghost. Rukia Kuchiki is a Soul Reaper, a spirit who helps others to move on while dealing with the ones who stay behind and turn into things called Hollows. During a sudden attack that leaves her wounded, Rukia transfers her power to Ichigo, which means they have to wait a while until it can be transferred back. This means Ichigo has to train, in order to get good enough to defeat more enemies, and also leads to him seeing more of the unseen world around him, including the skills of his classmate, Uryû Ishida, a member of a group who view Soul Reapers as enemies. There are some creative Hollow designs, some cool action, and a fun blend of fantasy and typical teen content.

Directed by Shinsuke Sato, who also co-wrote the screenplay with Daisuke Habara, Bleach is a slick and well-paced bit of entertainment. It may have a runtime of 108 minutes, but it hits the ground running, introduces all of the main characters with style and wit, and showcases some interesting fights in between the smaller moments. It also has a great cast of characters throughout, from Ishigo and his family (we see him lose his mother in the opening moments, he lives with his father and two sisters) to Rukia, her stern "colleagues" (mainly Byakuya Kuchiki, her older brother, and Renji Abarai), and the blissfully-unaware schoolkids who end up seeing a lot of destruction occurring around them without being able to see the cause.

The cast all do a great job in their roles. Sôta Fukushi is a likeable lead, playing Ichigo with a mix of standard teen insecurity and strength developed from his experiences. Hana Sugisaki is a lot of fun as Rukia, not at all pleased by the way things have developed, but also not wanting Ichigo to suffer because of it. Ryô Yoshizawa does well enough as Uryû, and both Miyavi and Taichi Saotome are good in the roles of Byakuya and Renji, respectively.

The CGI is also surprisingly well-done, with the film walking a fine line between showing everything it wants to show and doing so in a way that is within its resources. The Hollows are the most obvious use of computer effects, and they feel nice and other-worldly while also feeling pretty solid, but all of the enhanced fight moves, and the bigger impact on the surrounding environment, look about as good as you could want them to look.

I guess when reviewing films based on manga material I should sometimes add a cautionary note to people already familiar with the source material, be it the printed page or the many anime adventures that have usually already been put out there (as is also the case here). I don't though, because I just rate the films as films. That's often enough, most of the time, and I certainly feel that way when I've enjoyed something as much as I enjoyed this. 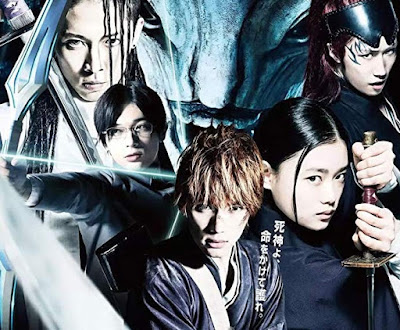