Directed by Noboru Iguchi, who also wrote the script with collaborative help from Makiko Iguchi and Jun Tsugita, I knew that Dead Sushi would be a bit of a risky viewing choice, coming from the man who gave us the "F Is For Fart" segment in The ABCs Of Death, as well as the somehow-more-awful Zombie Ass: The Toilet Of The Dead. But it sounded like fun, and I sometimes just want something fun. Iguchi has also delivered the likes of Tomie: Unlimited and The Machine Girl, so I had to remind myself that not every film he does is focused on backsides and flatulence.

Rina Takeda plays Keiko, the daughter of a famous sushi chef. Keiko doesn't seem to be able to reach his impeccably high standards, so she runs away and ends up working in a rural inn. While stumbling and panicking through her job, Keiko ends up in the middle of a crazy situation when the recent batch of guests are targeted by a vengeful man (Yamada, played by Kentarô Shimazu) who can transform their sushi into something sharp and deadly.

Although this is a fun film, first and foremost, just how much fun you will get from it will really depend on your tolerance for bad CGI and plot developments that get sillier. The first third is mildly amusing (there's even a fun Evil Dead II reference tucked in there), and the lead up to the first fishy kill is perfectly fine. But things just get worse from then on, and there is nothing else to help distract you from the negatives.

The script isn't that good, although there's always a chance that some things are lost in translation when watching something with English subtitles. It's at its best when juxtaposing the silliness with the very serious way sushi chefs take their craft. Unfortunately, the rest is fairly useless. Aside from Keiko, none of the main characters are given enough characterisation or worthwhile lines of dialogue to make them worth spending any time with.

Takeda is a good lead, and the saving grace of the movie. She does well to act seriously within situations that just keep getting more and more ridiculous, culminating in scenes that have zombies around her, flying fanged foodstuffs to be evaded, and nunchucks made from sushi. Nobody else works as well as she does, although nobody does a terrible job either. It's just a shame that Shimazu is the only other memorable character, and that's only due to him being the villain of the piece.

If you can handle crazy, if you can accept that some films revel in special effects that aren't that special or effective, and if you appreciate the fine art of making perfect sushi, you can maybe get some enjoyment out of this. Although I was left unimpressed, overall, there were moments here and there that helped to keep this relatively painless as I waited for it to get to the end (and it still feels a bit overlong, even with a runtime of just 92 minutes). It may be more fun with the right company, or the right amount of alcohol.

You can buy something fishy here (that's also the cheapest option for many other people, although it's a Region B disc). 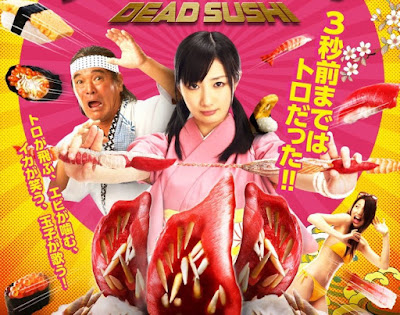