We've seen this kind of thing before. The stranger who comes into the lives of various family members, shakes things up, and helps them to embrace the things that will make them happy. Of course, as this is a Takashi Miike movie, things are a bit different here.

Kazushi Watanabe is the titular visitor, who comes smashing into the life of Ken'ichi Endô (literally, by way of a rock to the head). Endô is Kiyoshi Yamakazi, a TV reporter who is having a bit of a crisis after being bullied and abused in an incident that was also recorded. He also pays to have sex with a prostitute who is also his daughter. Yeah, it's that bad. And things get worse from there. His wife, Keiko Yamakazi (played by Shungiku Uchida), spends her time miserable, being beaten by their son (Takuya, played by Jun Mutô) and turning to heroin for some solace. The visitor is going to help them all love life a little bit more, freeing them further from inhibitions in a way that will bring the maladjusted individuals together into one maladjusted unit.

Written by Itaru Era, Visitor Q was one of a number of movies from different directors planned to specifically take advantage of new digital cameras, and the freedoms they allow. As you might expect, Miike used this exercise less as a way to push the technology, but more to push right up to the barriers of standard taste, and then go that one step further. Less a movie experience and more of an assortment of grotesque, and blackly comedic, acts, Visitor Q is one of those movies you can only ever recommend to someone if you know that they have previously been a bit daring while exploring the many dark recesses of cinema.

I used to love this film. Well, using the word in a loose sense. The content makes it hard, but not impossible, to love. Catching up with it again recently, after a gap of over a decade, I realised that it has two major flaws. The first big flaw is the whole look of the thing. I know that it's in line with the content, and I know that digital cameras were new at the time (and not half as good as they are nowadays), but this is a film that is ugly from start to finish, often in a way that just feels like laziness. Shot composition, the image quality, nudity being pixellated rather than characters being positioned differently, it all adds up to a bit of an eyesore. The second big flaw is the fact that it all feels rather pointless. There's no big statement being made here, no conclusion that makes all of the shocks and depravity worth your time. Well, okay, maybe it's not exactly pointless, but the point is buried so far under all of the nastiness that it's a hard one to give due consideration once the film has finished.

Despite those flaws, I still cannot help but admire and appreciate Visitor Q as a statement of intent from Miike, coming along just a couple of years after the likes of Dead Or Alive and Audition had made him a name familiar to cinema fans, and being followed up by the likes of Ichi The Killer and The Happiness Of The Katakuris. No matter where you stand on his films, and his prolific work ethic guarantees that some are a lot better than others, Miike has left us one hell of a cinematic legacy, and there's no denying that Visitor Q is up there with some of his most memorable outings.

You can get the DVD here.
And there seems to be a much more expensive disc option here. 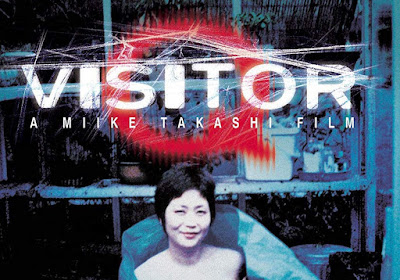